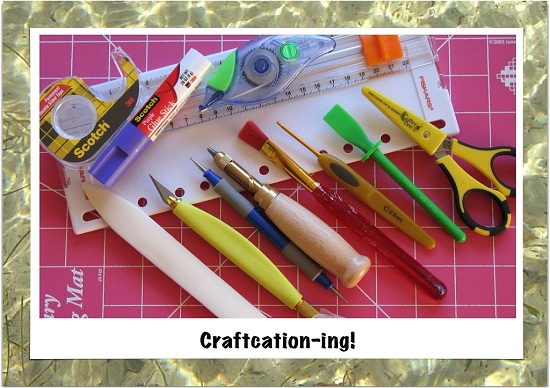 My wife, Belén Rodríguez, sends out smartly wrapped packages to friends across the country, hosts family craft days, watches tons of crafting videos while tweeting or Facebooking with crafty friends and I even joined her on a crafting cruise a few years back. So it was no surprise when she decided to volunteer at this year’s Craftcation conference here in nearby Ventura.

This is the second Craftcation: Indie Business and DIY Conference here in Ventura and it is composed of crafting classes, crafting business training, local tours and socializing with crafty kindred spirits. The conference goes on throughout the weekend. Many of the attendees are professional crafters with their own product lines, crafting stores, books, TV shows and much more. 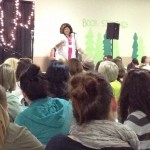 Kathy Cano-Murillo (aka “Crafty Chica”), last night’s keynote speaker and a friend, is a former newspaper writer, accomplished novelist, has her own crafting product line, has been on TV and was recently featured in a New York Times article on crafting. She shared a touching story about her beloved dog Cha Cha who passed away and how she was a great teacher in many ways because of her joy of life.

“Jump into the arms of what you love,” she told the crowd of over 200 crafters. Crafty Chica also urged the attendees to embrace their crafty sides and to shine and “shake their snow globes every day.”

Part of finding what you love also includes connecting with one’s tribe and many of the crafters are connected on social networks like Twitter and Facebook. There was an active group of Twitterers using the #Craftcation and #Makers2013 hashtags last night, even sharing Vine videos of the action.

Delilah Snell and Nicole Stevenson produced this year’s Craftcation conference and hopefully they’ll bring it back to Ventura next year as well.