Santa To The Sea Half Marathon and 2014 Recap

It’s been a couple of weeks since running the Santa To The Sea Half Marathon in Oxnard on Dec. 18. I was excited to tackle the course and try to set a PR for the half. The flat as a pancake course would be the perfect opportunity to run fast. I was also glad that the County fixed the road right at the starting line. That part of town is in an unincorporated part of Ventura County so it doesn’t get the extra attention that a city government would provide. There was also a great little running mural along the divider barrier closest to the highway.

But about a week before the race I decided to take the leap and sign up for an ultra, the Sean O’Brien 50k at Malibu Creek State Park in early February. With only a little over a month to go I decided to turn the Santa To the Sea Half into more of a training run. I figured that if I ran it too hard I’d have to take a few days off to recover. I’d need those days to do additional training.

Race day was chilly. I wore a Santa hat and bundled up, wearing a long-sleeved compression shirt with another shirt over that. I knew that wearing the hat and the long sleeve shirt would end up affecting my running by mile 3 or so, and it did. I wanted to stay “festive” so I kept the hat on and just enjoyed the run to the coast. By about mile 8 I started to slow down. I passed one man who was watching the race (he was probably 10-15 years older than me) and he said “hurry up viejito!” I guess the Santa beard I had grown for the race made me look a bit older than I am.

I wasn’t the only one who had an outfit on. Just don’t ask me what some of these had to do with Christmas… 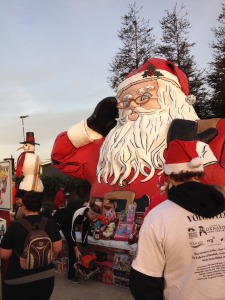 A look at some of the toys that runners donated to children in the area. 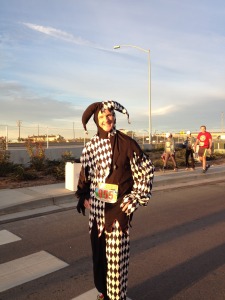 Santa To The Sea Outfit 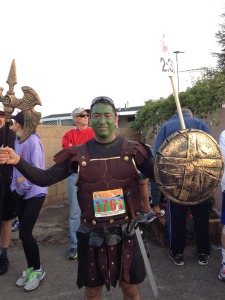 Santa To The Sea Outfit, pacer

I still felt pretty decent but set a new goal since my PR pace was pretty much out the door. This would be the first half marathon where I would run the entire thing without walking. During last year’s Santa to the Sea race I used a run/walk strategy so walked some every single mile. In the Ojai Half Marathon I walked large segments of the hill closest to the lake and during the Surfer’s Point Half Marathon I walked part of a hill around mile 11.

As I approached the last two miles of the race I kept pushing to not walk and my running pace slowed even further. I tried not to worry about people passing me during those miles and just kept moving. There was one runner who was near me most of the race until I surged on a bridge overpass and she lagged behind. She finally caught up with me around mile 12.5. It was nice to see a sort of familiar face but with about 200 yards left I decided that I didn’t want anyone to pass me at the end so I went into high gear and got my legs moving faster. My knees felt a bit wobbly, kind of like walking on stilts, but I was able to pick up some speed for the finish. When I later checked out the race photos I could see that the same runner was on my heels the whole time to the finish line.

After the race I walked around and made my way to the farmer’s market near the finish line. I grabbed a bag of honey roasted salted almonds and munched on them until I hopped on the bus back to the starting line. I chatted with the person sitting next to me on the bus and it was great hearing about his upcoming races and sharing that I was going to do my first ultra. It also set in as a bit of a reality check in that a 32 mile race would be almost a full half marathon distance longer than any of my previous training runs. I decided that I would drop down to the marathon race instead and look for an ultra race later in 2015. This would allow me to learn from the marathon trail run distance and see what additional challenges the long distance would provide.

I’m really excited about continuing my training for the Sean O’Brien Marathon and I think that it will be cool to do my first marathon and have it include over 7,000 feet of elevation gain. It’s going to be a beast of a race and I’m looking forward to it. I checked out the list of who will be racing that day and some awesome trail runners like Magdalena Boulet (@runboulet) (a strong favorite for trailrunner of the year, especially after her recent win at The North Face Endurance Challenge), Timothy Olson (@timmyolson_run), Chris Vargo (@TheVargo) and Nadia Ruiz (@IrongirlNadia) (only Latina to have run over 100 marathons by age 30) are signed up to participate in the different races. I’ll also get to finally meet and share the trails with my Twitter friend Marvin Tabangay (@sketch678) who is doing the 50k race.

If you’re reading this then the odds are you’re also into running and I hope we connect out on the roads or trails. Feel free to follow me on Strava.

Speaking of Strava, here’s the little “2014 Strava” video that is autogenerated for subscribers. It has some cool moments from this year.

What are your running plans for the year?

This entry was posted in Health and tagged #getfit, Half Marathon, jessetreks, Nyleand Acres, Oxnard, Race, Race Report, Santa To The Sea. Bookmark the permalink.