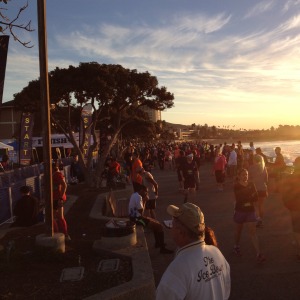 One of the features of the race is that when you cross the finish line you get a nice beer and some real tacos. Who can say no to tacos?

For most of the summer and early fall I’ve been doing almost all trail long runs so I had to start hitting the roads for a couple of weeks to start getting used to the hard pounding of asphalt and concrete. Ideally I could have used a couple of more weeks with long runs in the 10+ mile range but after the hard trail runs of the last few months I felt that I was “half-marathon ready” in terms of the endurance needed to complete one. I’ve also been slowly increasing the number of miles I’ve been running per week and am not hitting the low 30’s.

Course description
The Surfer’s Point Half Marathon is run next to the Surfer’s Point area of the beach in Ventura. When I train for road races I usually do a lot of training along much of the course. That really made things pretty nice. I knew that this would be a mostly flat course and was familiar with most of the twists and turns. For people who haven’t run on Pacific Coast Highway, things can get a little scary when you’re realize you’re actually running on the highway for about 5 miles of the race. The first time I did a training run on that segment some months back my wife was more than a little concerned. But it’s pretty safe out there.

Race Day
It was a beautiful and cool morning. The weather’s been a bit variable lately so I wasn’t sure just how cold it would be in the morning. I did something different this time and put my bib on my shorts instead of on my shirt. That way if things were cold enough I would just put a long sleeve compression shirt under my running shirt. Or I would just wear the compression shirt. Either way, I didn’t want to waste my time re-pinning the bib and worrying about that. I ended up being fine with a regular tech t-shirt, shorts and some compression socks. I think the socks made the difference in keeping me comfortably cool. Other people at the race were wearing garbage bags to stay warm and others were layered up and wearing caps.

That’s one of the times where my “extra padding” served a good purpose and I didn’t have to carry around a bunch of extra clothes to stay warm. Before the race there was a huge line at the port-o-potties so I got my warm-up in by jogging to the Crowne Plaza hotel and using their fine restroom facilities.

I found Anthony there at the race and chatted with him a bit then filmed the beginning of the Marathon race which he ran and was 15 minutes before the start of the half marathon.

Start to mile 3
After the Marathon runners were off and I made my run to the Crowne Plaza hotel, I started lining up for the race. There were pacers for the 2:15 (two hours and fifteen minutes) and 2:30 paces. I lined up closer to the 2:15 pacer since I was shooting for a 2:20 final. I set my Nike Sportswatch so that it was ready to record the run and waited for two waves to go off then we went.

The first half mile ticked off and we seemed to be going way to fast. My watch read that we were going at a sub-9 minute per mile pace which was almost a minute and a half per minute per mile too fast. I hung just behind the 2:15 pacer for the next couple of miles. I still felt as if I was going out too fast so I slowed it down a bit. No use burning out early in the race. By the end of mile three I had hit a 10:30 minute per mile pace average which was still too fast.

This segment of the race starts at Promenade Park just south of Surfer’s Point then it passes by Surfer’s Point and goes up the bike path towards Main St. and hangs a left towards Emma Woods State Park and past the park.

Miles 4 to 6
This segment of the race was entirely on the Pacific Coast Highway (PCH). I’ve found that some of the road there is very rough and it slows me down since I have some foot “drag” to my stride. You also have to be hyper vigilant in this part since cars can shoot right past you as you run. Between miles four and five there’s a turnaround and you can see how far other people are in front of you. Somewhat close to that turnaround, I saw the 2:15 pacer and I was even farther behind now. However, I did keep up a decent pace and hit the 10K (6.1 miles) mark at one hour 8 minutes which was a little faster than the overall pace I was going for.

Miles seven to nine
Miles seven to nine took us back past Emma Wood State Park and past the starting line. I was now off an average of 30 seconds per minute off my intended pace. The 2:30 pacer and bunch passed me up and my time goals were quickly going down the train. I still felt pretty decent physically. The compression socks helped my legs feel together. Unfortunately the high winds that were expected in the afternoon, started making an early appearance.

Miles ten to the finish
This is pretty much where I started falling apart. The winds weren’t horrible but they slowed me down and at this point I was feeling tired, more like stressed that my body had been pushing hard for the past two hours. There’s a mile stretch where there’s what race director Bill Escobar called a “false flat” that was not actually flat such so that I started walking parts. We’re talking about a measly couple of degrees of elevation gain. The plan was to conserve a little energy and leave some for the final miles.

This little road, Vista Del Mar, is off the highway and is kind of hidden away. The pavement is uneven in parts and not a single car went by. I wan’t exhausted yet but my motivation was dipping and this little road could have been a great place to just take a nice long walk. Then I remembered ultrarunner David Goggins and his crazy determination to get things done including finishing the Badwater 135 mile foot race several times and winning crushing 24-hour races. Goggins is a Navy Seal and he runs and does Ironman triathalons for charity to support the families of war veterans. In some interviews he says that he doesn’t even like to run or do exercise. He says he runs because people are interested in seeing people suffer so he does races where there’s a lot of that so he can raise money. If he can run all those miles of suffering to raise money then I could certainly stop walking and run up some of this little hill. So I did.

Once I got to the top of the little hill I started picking up the pace. OK, I was going to miss the 2:20 time and missed running at a 10:50 overall pace but I still had a shot at a PR if I hustled to the finish line. I kept a steady pace then picked it up more towards the end and came in at 2 hours 33 minutes (2:33:22), a new PR by a couple of minutes. I’m glad I was able to push through the frustration of falling behind my initial goals and was still able to salvage the PR.

I kept on my feet for a few minutes after the race then grabbed some tacos and a soda and sat on high concrete container/bench along the beach walk. I was able to take down the first taco but my stomach wasn’t ready for the second. I hung out for a while and greeted Anthony after he finished the race. He did really well, coming in 7th place.

A little after heading out from the race I drove into In-N-Out and my stomach was able to handle that a bit easier. It’s not the healthiest but my body craves salt and protein after a long run or race The double double combo hit the spot!

Takeaways
In getting ready for the Santa to the Sea race I will make sure to get in some longer tempo runs and some long intervals so I can better handle the long-term high intensity pace.

You can view my race stats on Strava here and feel free to follow me there.