I wasn’t a part of the retreat but did catch a Twitter’s view of the events. On May 20th the #LATISM column on my Tweetdeck lit up with bloguera Foursquare check-ins at airports across the country for their trips into DC. Even at 10 p.m. Pacific Standard Time, I could see tweets and photos roll in from the early DC arrivals and forming late-night party. The following two days included streams of live-tweeting on branding, leadership, and community topics from corresponding sessions including those from the White House.

I think it’s amazing that the Latinos in Social Media organization has grown so much that it is now an influential part of our online and offline communities. Coverage of the blogging event included two web posts on the White House site. ¡Adelante, mujer Latina!

Did you attend the Top Bloguera Retreat? Would you like to share one of your photos? If so, send me a tweet at @jesseluna and I’ll add it to this post, and give you a photo credit, of course.

>>For more information, see the official write-up on the LATISM.org site.

Rangel’s Choice Not to Identify 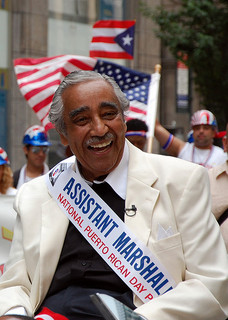 Congressman Charles Rangel (D-NY) is stuck in between worlds. In his multiple terms in office, he has chosen to identify only with his mother’s African-American cultural background although his father is Puerto Rican. In interviews, Rangel says that he doesn’t relate with his father mainly because of the way his father treated him and his family, but also because they were separated at an early age.

At the same time, Rangel is also serving in a district that is becoming increasingly Latino especially after the district was re-drawn. Rangel will face competition from Adriano Espaillat, a Dominican-born state senator who is pushing to become the first Dominican born Congressman.

Congressman Rangel went so far as to direct a critic on Twitter to a New York Times article explaining the reason he doesn’t bring up being Latino.

A portion of the Times article explains why he doesn’t relate to the Latino experience:

As for whether having a Puerto Rican father played some role in his identity, the congressman, now 81, noted in the interview that he was very young when his father left the family, so he “never really enjoyed any of the cultural riches of a Puerto Rican background.” And on Tuesday, he said that if he had had a better relationship with his father, “I would be hablamos con ustedes en Español, no en el Inglés.”
–New York Times

I think this issue comes down to identifying with versus serving a group. Should Congressman Rangel have to fully embrace and leverage his Puerto Rican family roots to get Latino votes? I think the better question is whether or not he fully serves the needs of his Latino constituents.

I have mixed feelings about the cancellation of the TV show “Devious Maids”, an Eva Longoria executive-produced show which was due to air this Fall.

On the one hand, having a show all about Latina maids makes it an easy vehicle to reinforce common stereotypes about Latinos. We’ve seen it before, if you’re male you are either a custodian or landscaper, if you’re a Latina you’re either a vamp or a maid.

That said, how many Latinas are there on TV, at all? There certainly isn’t a proportionate number of Latinas on TV compared to the US population. For many people who live in areas with little or no diversity, images on TV can be the only connection they ever have to people from different cultures and backgrounds so it’s important that characters not be distorted by filtered stereotypical lenses.

I respect Eva Longoria as a strong advocate for Latinos, as an artist, and as a person who cares. So in that respect, it’s very sad that her new show was canceled. The viewing public never even had a chance to judge whether the story line was stereotypical or empowering.

It’s also sad that the first voices of discontent often come from other Latinos. It is difficult for anyone to get their own show so it doesn’t take a lot of excuses for an executive to give a show the axe.

As a side note, my father was a custodian for over twenty years and my mother cleaned homes for a short time in exchange for English lessons.