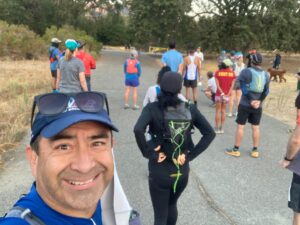 When I find myself in times of trouble, Courtney Dauwalter comes to mind.

I was 11 miles into the Sean O’Brien 30K race when my quads started to revolt. The climb out of Corral Canyon always does something to me. It’s as if the moon rocks take control of my body and do with it as they will. Maybe the spirit of Jim Morrison is still roaming the tiny sandstone tunnels looking once again for its kingdom of lizard subjects but is willing to take over humans as well.

Then I went to a piece of slanted moon rock and stretched each quad for a couple of seconds.

One runner passes. I hear another coming up on me.

Could it be a mechanical issue? I quickly hike up my shorts and peel back the inner liner which is saturated with sweat, the same sweat that disabled my phone from allowing me to navigate and take photos or change my playlist. The liner was partially keeping my legs from extending all the way.

I take off running again. I repeat the mantra a couple of more times and soon forget about seizing quads and then focus on consistent easy running. I learned that simple self-talk from interviews I had seen with Ultrarunning goddess Courtney Dauwalter who had just crushed the UTMB race with a victory, coming in 7th place overall. Whenever she finds herself in a tough spot she tells herself that she is fine. That mostly works unless the body is really going haywire as can tend to happen in the crazy long races that she does.

The whole exchange with stretching the quads only took a matter of seconds. In fact, the entire race I only stopped a total of around 3 minutes and that included the aid station where I took in water, PB&J and handfuls of watermelon. In 2020 I was stopped for 20 minutes.

Once back to the chase, things started to feel good again. For the next two miles of ridge running, there isn’t a ton of elevation gain, maybe 200 feet so I was able to cruise pretty well. By the time I got to the big water tank, the runner who was just behind me caught me.

“These hills are no joke on the quads,” he said.

I replied, “No kidding.”

I remembered that this tank, I think I dubbed it the Thank Tank last year, is an indication that the big downhill is about to start, so I kept the conversation short and powered up the last part of the climb then hammered down.

A little bit later on I approached the bench and saw the 30K runner who had passed me stop to take photos and rearrange her hydration pack. I zoomed by and took on the huge two mile descent. Luckily, I still had strength left in my quads to take on the massive impact of the 1,000+ feet drop that was to come. The training miles of steep trails and pounding downhills runs had helped season my quads to allow this. I was able to get a 9:30 minute mile split in there somewhere which is fast for me.

By the time I hit the Backbone Trail descent by the Las Virgenes Municipal Water District plant (the union I work for represents workers there, BTW), I was gassed. I took the initial bit of the climb slow and downed a GU then took a slurp from my hydration pack which was water with LMNT electrolyte mixed in. I had gotten some samples with my Dirtbag Runners trucker and sweatshirt purchase. Thanks, Crista!

I usually slow down a lot by this point. The climb down is usually rocky, rutted and technical. This day it was sandier than usual because we have had zero rain in months. That took away an excuse to power hike it so I started an easy run pace down.

By the time I made my way to the very dry creek I was power walking, trying not to trip on the tight curves and the GU was still kicking in.

I got to the straight away at Tapia park and was still power walking when a runner from a different race distance passed me and we exchanged some encouraging words. The end of the race is usually when I really burn a lot of time. Not today. As soon as the runner passed I started an easy jog again and the usual long slog went by rather quickly.

When I got to the start of the Angry Chihuahua climb, just outside the YMCA camp, I was ready for the final push. I had just started when Jesse Haynes, champion ultra runner and husband to the Sean O’Brien race director, Keira Henniger, passed me.

“Let’s real it in,” he yelled back. He might have said something different but that was essentially it.

The introverted extrovert that I am, this brief exchange gave me energy and I pushed the power walk pace and when I got to the next climb I did something that I never do when finishing up a race or run at Malibu Creek, I started to run up part of the Angry Chihuahua. I did that in short bursts then went back to power walking but the bursts gave me energy and I remembered doing climbs in training with a weight vest and remembered finally being able to run up all of the Ray Miller Trail during training.

I looked back and it was the runner who had made the comment about the sore quads. He was about 100 feet behind me and I knew he was also in the 30K race.

I was two short turns away from the top of the climb and knew that I was going to have to race the last bit of an 18.6 mile run. Just before I crested, I started running and quickly ran the downhill. I wasn’t looking back because at this point if he had more in the tank than I did, he deserved to catch me. But, I wasn’t going to make it easy for him.

I got to the last gravel road and took off. I still had some fuel in the tank and this was the time to burn it. With 100 feet to go there was a group of spectators and volunteers cheering out next to the final stretch before the turn to the finish line. I didn’t hear any crunching behind me but I was full on ready to do a sprint and dive at the finish line if necessary. I got to the turn and heard someone say to keep going and run through. There was someone there with her hand out and that was our finish line which I reached without being passed.

The entire race I decided not to look at my overall time. I had one main goal and that was to run every mile under a 20 minute per mile pace. That included two climbs that were over 500 feet in elevation gain.

When I had reached the Corral Canyon aid station around mile 11, I set the lap/split function on my watch because the final out and back turnaround was supposed to be exactly 2 miles and I wanted to track that. I remember last year that short distance seemed like an eternity so I wanted to see the progress. This also changed the interface on my watch and the overall time was less prominent.

At the start of the race I pushed hard to get up that long climb and ran parts of it. I passed several runners there which was a huge change from my previous races where everyone passed me there. My mile 3 split was 19:27 with 549 feet of elevation gain and mile 4 was 19:52 with 623 of elevation gain. When I hit those I knew I was going to be able to hit my main goal if I didn’t get hurt or make a huge blunder with my nutrition.

I didn’t want to fixate on the overall time because this race is really a part of my Virtual Boston Marathon training and its primary purpose was as a fitness check, not just a race. I did have a dream time goal in mind but I also wanted to enjoy the race.

I got to the race early and got to meet up with Christophe, Nicole, Stephanie from our Ultrarunning Misfits group. I said hello to Sheny and Gus from Anytime Runners. I said hi to Paul but I don’t think he recognized me because of the mask. I chatted with Ro at the start line and she later sent me some great race photos that she took. I got to briefly chat with Marisol on the course and said hello to all-star runner Mayra Lopez at the race start. This was my first race since the pandemic hit so I didn’t want to fixate only on the time then get sulky if I was behind pace. I wanted to have fun!

“When I’m with my squad, I cannot do no wrong, yeah” – Travis Scott, Goosebumps

Last year I ran the race in 6 hours and 24 minutes. This year I crossed the finish line at 4 hours and 38 minutes! When I stopped my watch at the finish line I was surprised at the time and yelled, “FUCK, YEAH!!”

I’m ever grateful to all the volunteers who were out there making the day happen and to Keira for putting on another great race. It was so fun seeing everyone out there and can’t wait to get back at it.

Next up is the Virtual Boston Marathon the weekend of October 8-10 where I’m attempting to run a sub 5-hour time, then it’s the Leona Divide 50K on November 6th! Hope to see you out there!

Here’s a link to the Strava activity. 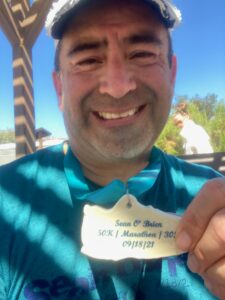