Two Mountains and A Hill

I got a note from my doctor and he said “no long runs” before my next test. He later clarified in his online note and said to keep runs “under 5k.” This was a major bummer because I’ve been working a lot of weekends lately and this weekend I had a nice juicy three-day weekend and was already planning out a great long run for Saturday. So I decided to do the funnest short runs I could over the weekend. Kind of like a snack pack of running as I continue to train for the Ray Miller 50k in November.

The first was a shorty run at Arroyo Verde Park in Ventura. According to Strava.com, I’ve completed over 50 runs at this park. Sometimes I’ll do multiple loops around the 2-2.8 mile trails which are in the Ventura hills.  The climbs and descents are varied enough, ranging from gentle climbs to hands-on-quads climbs, that it makes for a great training ground.

I was only going to be able to do one loop so I made it count and took the long way around the park. The first climb a quarter of a mile in had a huge trench in the middle of it this time. My calves were warm enough to climb it fairly comfortably despite the 45% grade. I was passed by a woman on a hill who was power walking her two dogs. The dogs seemed to be be pulling her up some but I know that if my dog was there it certainly wouldn’t speed me up as it would chase and sniff every bit of wildlife out there.

When I got to the next climb I ran part of that and got stuck behind a big group of runners. When they finally saw me they moved aside and I bounced up the rest of the little climb. There were a lot of people out there for a Saturday morning. I think we all had the same idea to get some miles in before the hot sun came up. When I got to the top of the next climb I took a steep side trail that is a little short cut up to the next level of the trails. This way hugs the park’s property line along the top of the hill. Taking that hill leads to another hill which is even steeper. I haven’t been able to make it all the way up that little part of the hill without stopping but I only stopped twice this time.

As I climbed I saw a trail of women climbing up a different trail leading to the top of the hill. By the time I made it to the top two of the women had made it already. I powered by as they waited for the rest of their group. I continued to hug the property line till I got to a fence and when I scampered down a steep slope I hung on to the chain link fence and my left hand got caught on a loose link. This is when wearing a bandana comes in handy. I wrapped the bandana around my bleeding hand and it kept to keep pressure on the not too deep wound.

I made my way around the rest of the park for a nice 2.4 mile run with a nice 711 ft of elevation gain.

Sunday rolled around and I was ready for another morning of running. I texted my brother-in-law bright and early to see if he wanted to join me but he was off on another adventure. I originally was going to head off to the Chumash Trail to do some hill repeats but the idea didn’t seem all that fun then I remembered Sandstone Peak. Yes! Sandstone Peak is the highest point on the Santa Monica Mountain range and you can tag the peak with only a 1.5 mile hike. I drove the winding 5.5 miles off PCH (Pacific Coast Highway) to get to the Malibu trailhead. Once again it looks like a lot of folks had the same idea to get an early start on the day.

View from the top of Sandstone Peak.

This was only my second time doing this hike but it was all pretty familiar. It’s kind of hard to get lost because you always just have to head up. There are a couple of other connecting trails but they head down to other canyons.

I ran some and power hiked the rest. I stopped about three times during the climb to take photos and catch my breath. When I got towards the top I saw a steep little trail and I couldn’t remember if I had to take that to get to the fence that I remembered. I kept going on the main trail and it headed down and that didn’t seem right. I headed back and tried the little trail but it was way steep and I wasn’t up for scrambling since my hand was a bit tender from the chain link fence incident on Saturday.

I saw another group of people who I had passed earlier continue on that same down path and I ended up following them till we got to the fence. From there I took some photos then scrambled up to the peak. There were about 20 people hanging out up there enjoying the sunshine and taking photos and such. I climbed the top most part and sat up there for a while then moved to give others a chance.

It was time to head off so I found a little trail and shot down that. The tread on my shoes were a bit too good on the rock and I almost fell forward which would have led to a nice header but I caught myself in time. This ended up being the steep way that I had passed on the way up. 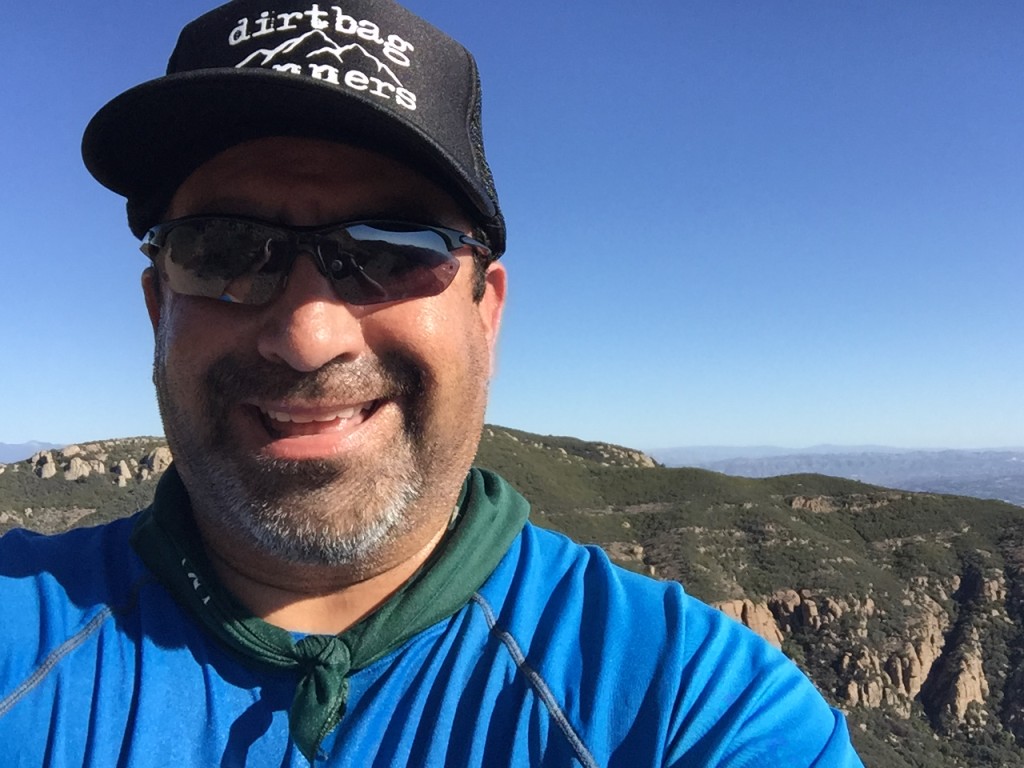 The last time I went up to Sandstone I went with my brother-in-law and his family and I had fun screaming down parts of the hill with my nephew. This time a good portion of the trail was extra rocky and even hiking down I felt like I was on roller skates. I did eventually find some smoother trail segments and got some speed going on the downhill.

After the hike I headed down to Neptune’s Net which is right off the Yerba Buena Rd. that I used to get to the trailhead. The shrimp and chips hit the spot but I only ended up eating part of the order.

The hike was 3.0 miles total and it ended up being 1,062 ft of elevation gain – and I got to tag a peak. Not bad for morning’s work and my legs were still fresh.

I’ve been wanting to hike up to Hines Peak in Ojai for a while now. And I will still have to wait some before I do the 20 mile hike. But that wasn’t going to stop me from doing another shorty run there.

I drove up to Sisar Canyon Rd. in Ojai, just around the hills from Santa Paula, and set off for the third hike of the weekend. I’ve been out on those trails a few time and I usually park further down the trail. This time I drove up to the water towers so I could get in a bit deeper into the canyon. Vehicles are allowed up to a gate but I don’t trust my car to make it up through all the trail ruts. 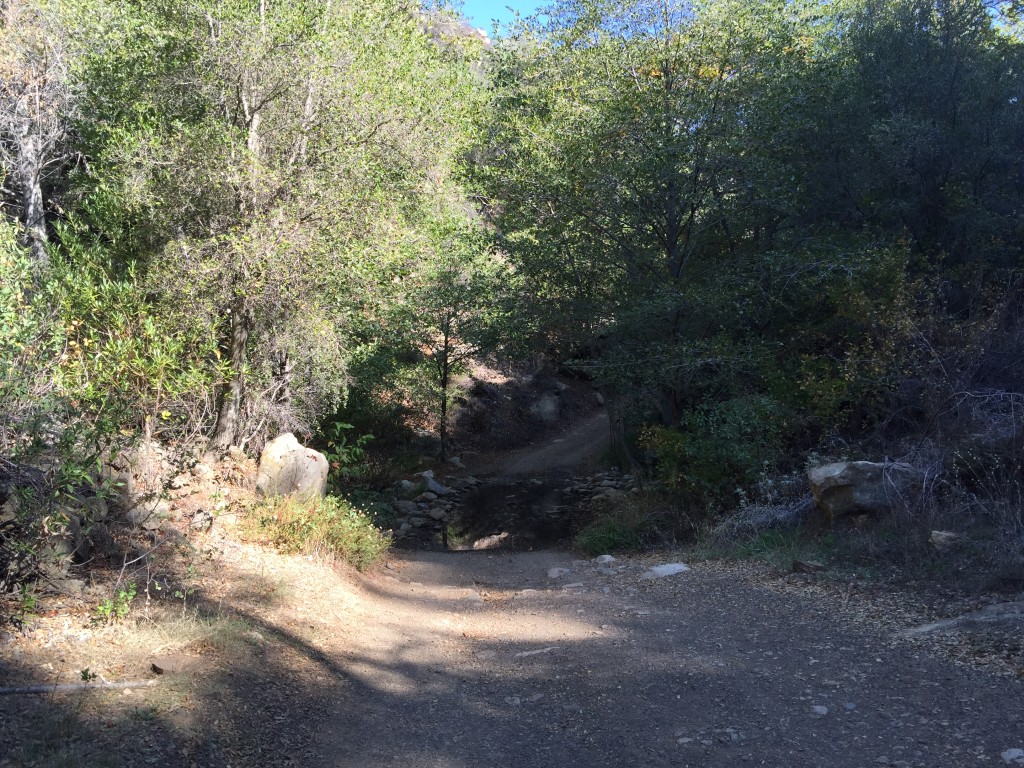 Because I knew that I only had a mile and half of climbing I set off at a rather quick pace and alternated running and power hiking. It wasn’t my best effort but it’s been a while since I tried running uphill on those trails. The sun was already out and the trails were heating up. I could smell the sage and pick off a bit and rubbed it on me to see if that would deter the pesky mosquitos. I tipped some of my water as an offering after I took sprig. As part of the healing tradition you can also leave some of your blood as an offering but I had already given during Saturday’s run.

I didn’t remember how far I would get only going 1.5 miles up and hoped that I would at least make it up out of the canyon but I only got to the second stream crossing. I felt good though and turned right around and ran all the way back to the car slowly picking up my pace on the way down.

When I got home I left the sage bundle on the counter and my grandniece asked if that was for her. I told her that I show her how to wrap the bundle.

The second mountain was 3.1 miles and ended up being 575 ft. in elevation gain.

All in all it was nice to hike and run on different trails especially all in one weekend. Only doing shorter runs allowed me to set whatever pace and intensity that I wanted without having to worry about bonking or running out of water on some very hot days. Knowing that I was only going to do three miles or less also took some of the pressure off from having to do massively long epic runs. As an added bonus I was still able to come home and actually do some house work and not be a half dead zombie.

If you only had 5k or less to do a run/hike, where would you go?