It was September of last year and I had just met with my doctor. After a few months of exercise and completely shifting my diet, I had controlled my diabetes and had lost 30 pounds. 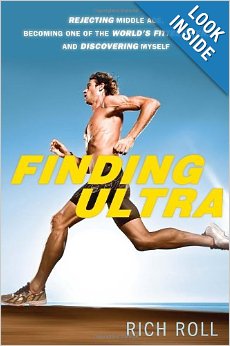 A couple of days later on a family vacation, we spotted a small bookstore and I came across a couple of books that looked interesting. I remember Tim Ferriss’s book “The 4-Hour Body” mentioning ultra marathoner Rich Roll and his book “Finding Ultra” so I picked that up. Next to that book was “Born To Run” by Christopher McDougall. I hadn’t read an entire book in years so I kept it real and only picked up the one book.

In “Finding Ultra” Rich Roll wrote about his transformation from a sluggish middle-aged man who struggled to climb the stairs in his home to an ultra marathoner, running double marathon distances as part of competitions.

It was very powerful to read about Roll’s addiction to drinking and how his recovery took time as he reflected on a path of destruction.

The book gave me hope that if I stuck to my healthy eating plan and kept exercising that I too could go on and participate in crazy fun adventures like triathlons and super long runs. At that point, the furthest I had run in 20 years was one mile.

My favorite parts of the book are:

* Roll’s description of how he bonked (runner’s speak for a point in a race where the runner’s mind is ready to continue but the body mutinies and can’t go on as planned, or stops) early on in a race then later got some sage advice and learned about Zone training. I’ve used the Zone training philosophy as a key part of building endurance and it helped me train for a half marathon and go on to do a difficult 19 mile trail run.

* Roll’s relationship with Jason Lester during the EPIC5 challenge where Lester and Roll took on doing 5 full Ironman courses on five different Hawaiian Islands in what turned out to be 7 days. When things got tough Lester would turn to Roll and say, “That’s why it’s called a challenge.” Whenever I’m doing a tough workout and am about to hit that point where I say “why the heck am I doing this when I could be chilling on the couch watching Miami Vice reruns on Netflix” I remember Lester’s line and gut it out to the finish, because that’s what this is about.

* By the end of the book I was convinced that I was missing a lot of nutrients by only sticking to my Slow Carb Diet plan. A big part of Rich Roll’s story is about how he uses plant power to help fuel his new energetic life. I’ve taken up juicing and blending great nutrient-rich concoctions that have helped me get through workouts and recover from them.

* Another takeaway from the book was the part where Roll decides to sign up for an Ironman race and his coach asks him, “which one?” That simple question is one that takes one from a mindset of “I want to” to “I’m going to.” There is a big difference between hoping and intending. When you sign up for a specific race then there is a big change that happens. Things become clearer and you can set your goals and study your race with intention.

By the end of the book I knew that I wanted to race in a triathlon. But given that my swimming skills are less than exemplary, I decided to sign up for a sprint duathlon where I would run 1.5 miles, bike 11.6 miles, then run another 1.5 miles. I signed up right away and couple of short weeks later with little preparation did the race and finished (that was my goal).

After reading “Finding Ultra” I have gone on to read over a dozen running books and will share more of the inspiration of each book here on future blog posts. If you enjoy “Finding Ultra” then you’ll love Rich Roll’s podcast, I do.

What is the latest book that you’ve read and that has inspired you to make a change in your life?