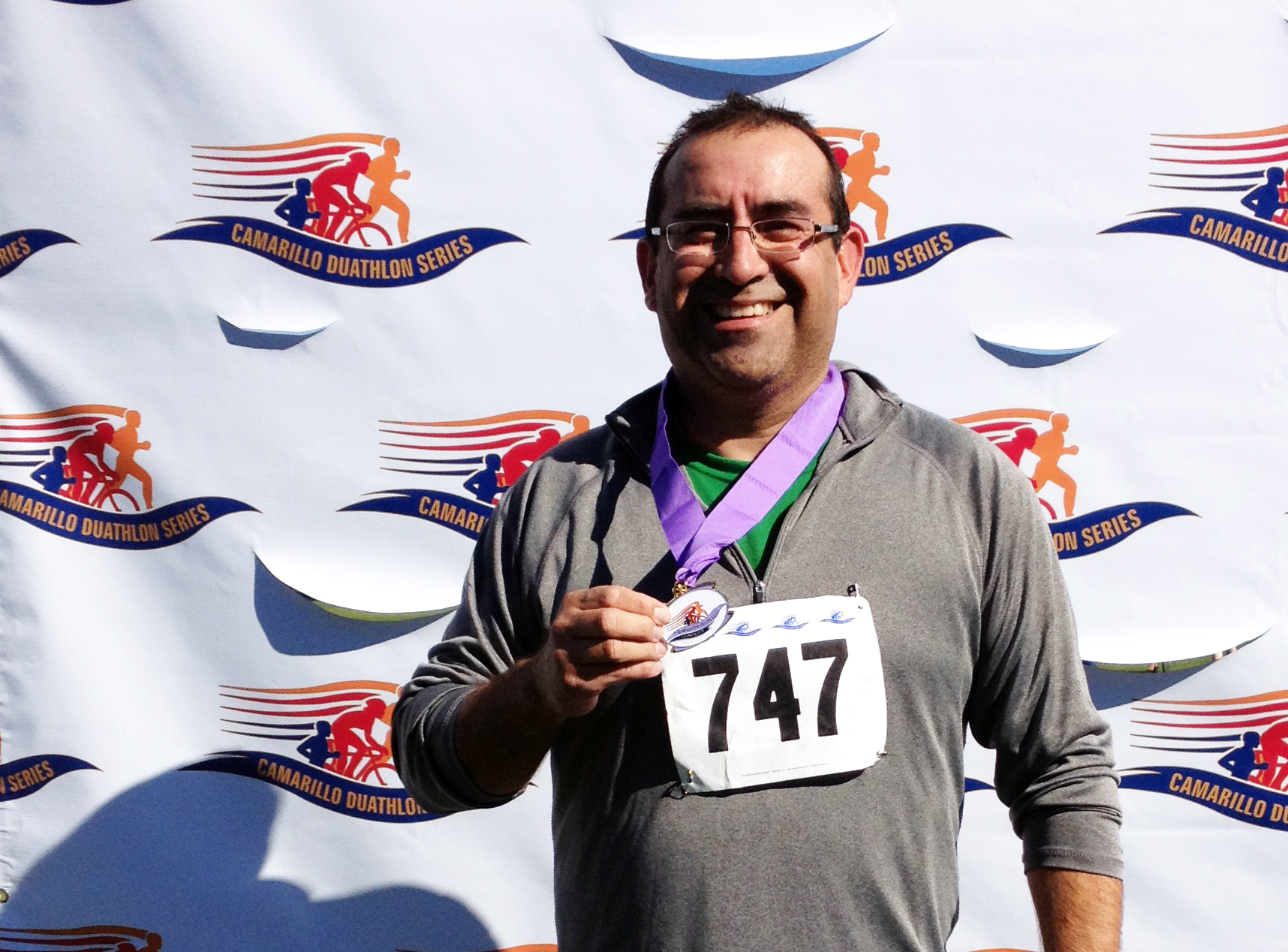 This past Sunday, October 6, I competed in my first multi-sport event ever, the Camarillo Duathlon. In my previous post I mentioned that I was training for a triathlon after working hard to release weight and to control my diabetes. I expected that it would take me at least 2-3 months to prepare for a triathlon because of my still-developing swimming skills.

So when I saw that there was a duathlon almost in my backyard and that I only had to run and ride a bike on a mostly flat course, it caught my attention. Instead of using my horrible swimming skills as an excuse for not doing a triathlon, I decided to jump on the duathlon and signed up.

Excuses
The road to inactivity is paved with excuses. I didn’t own a fully-functioning bike, hadn’t run more than a few blocks in years, and still have some extra poundage on me.  I could have used any of these as an excuse to back out of the duathlon but I replaced those excuses with other perspectives.

Ok, I didn’t own a fully-functioning bike let alone one of those rocket ship time trial bikes that others would be using. But I could buy a working hybrid bike for a decent price. Although I hadn’t been running much, I have been taking mile-long walks and doing time on the treadmill consistently for months. Also, I’ve dramatically improved my diet and fitness by working out at the gym and doing tons of cardio and weightlifting. I pretty much knew I’d end up at the bottom of the race pack but knew that I’d have enough in the tank to complete the race.

90% Mental
As Yogi Berra might say, duathlons are 90% mental and the other half physical. I knew my body could complete the race because of the work I’ve done over the past months. I also joked with a co-worker that if I could do a 24 hour round trip rally and lobby visit to Sacramento that I would have enough stamina to complete a duathlon.

THE RACE
As I was doing research for the race, I looked at several YouTube videos where athletes shared their duathlon-cam views of the race, gave tips for how to negotiate transitions and other race-day tips. Several also blogged about their experience on the course so I’ll do the same here in hopes that it might help another first-timer or encourage others to try out multi-sport events.

The First Run
I did the Sprint competition and the Olympic competition had started 20 minutes earlier. As folks started making their way to the starting line for the Sprint race, the Olympic racers zoomed by on their way to their bike leg of the course. You could see the amazement on some faces as the race leader zoomed by in an unreal time. He was smiling as he passed and it brought a smile to my face.

The first 1.5 mile run started out on the street and there is no line on the road or nearby. Everyone just kind of bunches up near the event organizer, Bill Escobar. Bill saw everyone kind of looking around for the starting line, looked around then told everyone the big tree was the starting line. I turned on my Nike Sportwatch GPS feature and hoped that it would connect before the race started and it finally did just before the air horn went off and we all took off. We headed up Eubanks St. then turned on Aviation until it doglegged to the right for another half mile. As I mentioned, I haven’t been doing a ton of running so I did speed walk part of the course. That landed me toward the back of the pack but I was glad that I wasn’t doubled over before getting to the bike. I had the suckiest run of all the men but would fare a tad bit better on the final leg of the run.

Transition 1
The good part of having a hybrid bike (and one of the only ones) was that I didn’t have to change shoes during the transition. I just had to take off my cap, put on my helmet and walk out the bike and I was out in around 32 seconds, the 11th fastest time.

Biking
The biking portion of the race is tons longer than any road biking I’ve done in 35 years. As a child we used to take out bikes all across the city in search of fun and mischief. Now, all these years later I’d be crossing portions of Camarillo in a competition.

By this point you may be thinking that I was crazy for taking on this challenge with such little training in, you know, running and biking. But my goals were concrete – finish the race, stay present and enjoy the time. But back to the biking…

Once you shoot out of Freedom Park there’s a fairly quick right onto Las Posas Road which takes you passed a railroad track. I tried to remain present as I passed the tracks where I had been crashed into while driving a car, 8 years ago. The turn onto Cawelti Road came up quickly enough then turned into a “challenging” ride into a strong headwind. I kept chugging along as fast as I could and about halfway through that stretch was passed by some of the Olympic race athletes and a couple of them gave me quick encouraging words, “You’re doing great!” one yelled as they zipped by. Another woman passed me and said, “This headwind is … special.” Special indeed.

After two miles of headwinds I turned onto Lewis Rd. and the sky opened up and now I was finally zooming down the road. This went on for a beautiful 3 miles until I made the turn back onto Las Posas Rd. The headwind was as bad as the one on Cawelti Rd and I was burning up my legs trying to cut through it all. One rider from the Olympic race yelled as he passed by “Go to a lower gear!” The same gentleman parked in front of me before the race so he felt confident enough to give me tip. The tip certainly helped and I was able to finish the bike portion with a flurry of speed.

Transition 2 & Final run
Once I hit the transition area I took a little longer this time to take a big drink of water and not have to carry a water bottle with me. When I picked up the race package on Saturday from Bill Escobar, I asked him what the number one mistake newbies made at the race. “They forget to take off their helmets before running” was his reply as he chuckled. I did remember to take off my helmet.

As I headed out of the transition area my legs were like Jell-O. In one of the blog posts I read as part of research, the writer said that a “gorilla jumped on his back” and slowed down his legs. That made me laugh out loud but it’s totally true. My strategy was to walk then run in bursts and hope to catch a few people along the way and for my Jell-O legs not to turn into complete jelly.

On the last half mile I passed a couple of more people who had passed me on the bike. I looked back to see if they were gaining on me on the final few yards but they were nowhere in sight. I cruised in for the finish and was very grateful for being able to compete in the event.

Here’s the view after uploading my Nike GPS Sportwatch info. I forgot to turn off the watch after the finish. I walked around for a bit before I realized that the watch was still going. 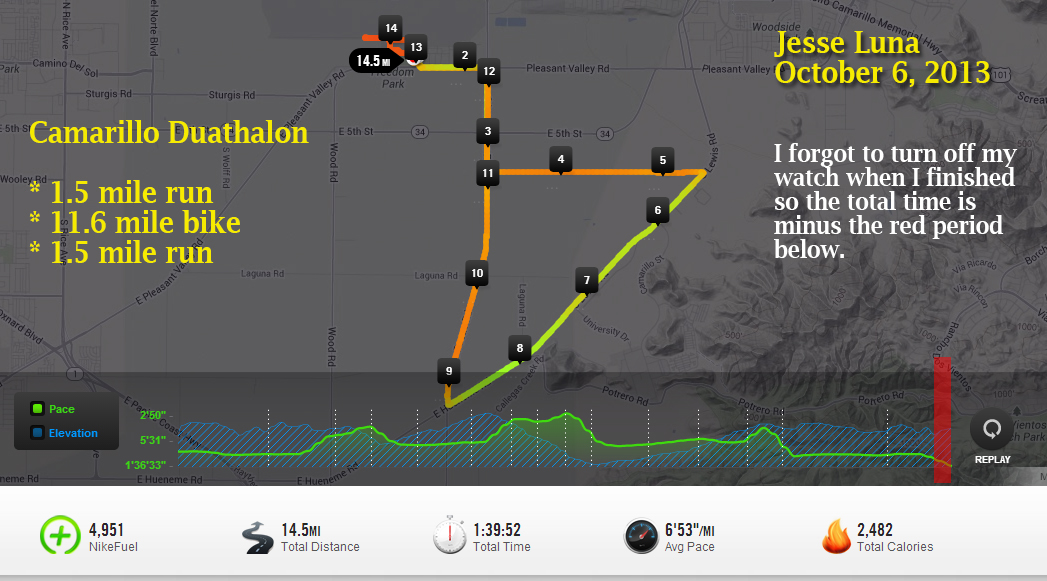 Results
Now, you can say that I came out second to last in the Men’s Sprint competition or you can say that I am on only one leg of a much larger race that started months ago when I chose to go on this fitness journey. Here are the statistical results.

Next Steps
My current steps have been very careful as my quads are still sore. My legs are no longer Jell-O but they are still somewhat gelatinous. I’m ready to start training on running and biking and to seek out the next event. I did see a triathlon in my hometown of Pasadena where the swim portion is a mere 150 meters in a pool. This is only 140 more meters than I can swim now so I am confident that I’ll be able to do the race in mid-march.

I thoroughly enjoyed the Camarillo Duathlon and the vast majority of folks were great and supportive. I wasn’t the only person who didn’t have a time traveler bike and my guess is that many others are also on a similar fitness journey. If you are also on this journey, I invite you to join me for the next multi-sport event and let’s get into shape together.