Tecnifícate Conference Gets Techie in Riverside

Sonia Farace and Ana Reyes from Sony spoke on social media for families and for professional development. To get a sense of the tech savviness of the crowd, Farace asked how many people were familiar with and had used Skype and nearly every hand went up. When it came to whether folks had heard of Infographic Resumes, only a couple of hands went up though. 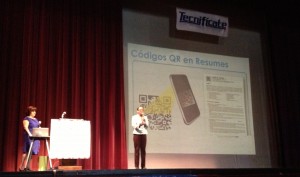 I have been a speaker at two previous Tecnifícate conferences, sharing information on using social media for social good and to support business start-ups. As in the first conference I attended, over a third of the participants identified themselves as being small business owners.

This is pretty huge.

I remember watching a video of serial entrepreneur Loic Le Meur at a Stanford Business School event. Loic looked shocked when only a third of the business school audience raised their hands when asked if they had started up their own business or planned on doing so. Entrepreneurship isn’t for everyone. This wasn’t the case at the Tecnificate conference.

At the conference, I ran into Diego Cardenas who has several cool products and businesses in play. One of his products is a battery charger for Kindle devices that serves as a Kindle cover and iPhone charger. It allows your Kindle to run for 20 hours straight. Diego also has an iPhone app which allows people who speak different languages to do text translation on the fly. That means that I can use his app, Sendboo, to send a text in English to a friend or colleague who speaks a different language, like Portuguese, and the friend will see the text in Portuguese on his iPhone. The app works in 30 different languages.

Here’s Diego with a very quick view of his product:

Later on in the afternoon, young leaders from the Leadership and Technology Institute spoke about how they are helping with technology education for youths. Then Ricardo Arcia from Teravision Technologies spoke on lessons learned from an early startup. “Fail cheaply” was one important message.

Unfortunately I wasn’t able to stay for all of Ariel Coro’s keynote address but I did hear him reinforce the importance of education, especially technology education. The Tecnifícate conference and his work on building the Tu Tecnología site is clear evidence that Ariel Coro is doing what he can to help boost Latinos in technology.

For those who missed the conference, you’ll have another chance as the Tecnifícate conference is headed up to Santa Barbara on May 25. Hope to see you there!