Hundreds of media activists made their way to Denver for the National Conference for Media Reform this past weekend. This was my first time attending the conference and really my first major exposure to the media reform community. I’ll be blogging more about media reform in the weeks to come but I wanted to share some of what I learned before I forget the details.

Two – There are probably many small independent media outlets already in your community. Keep your eyes open and connect with the people running the news station or online magazine and build a relationship with them.

Three – Media consolidation is a huge global problem. It is easy to underestimate the power Big Media has to influence the way we think about important issues. Would the US have gone into the second war in Iraq had mainstream media really dug deep into whether there really were WMDs in Iraq? I think not.

Four – I had never heard the phrase “cultural organizing” so it was good to see how groups like CultureSt/ke are connecting art and action.

Five – I finally saw a 3D printer. It’s an amazing idea which will lead to big things in many areas. It’s also small enough to be portable so you can create things on the fly. Independent media meets independent manufacturing.

Six – I met a lot of cool people and learned from them all including my roommate at the event Peter Schurmann from New America Media. Unfortunately he learned that I snore like the testing lab at a buzz saw factory.

Seven – Prisons charge inmates crazy rates ($20/minute) to talk to their loved ones over the phone.

Eight – This is related to #5 – Favianna Rodriguez is pretty awesome. She is an artist and co-founded the petition site Presente.org and CultureSt/ke. She was also one of the first 100 people I followed on Twitter over 5 years ago. 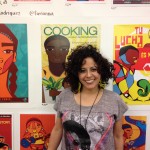 Nine – Organizations like Democracy Now and FreePress.net are doing amazing things to support free independent media across the country. *Disclosure: My trip was partially funded by a generous grant from Media Democracy Fund via The Media Consortium group.

Ten – Storytelling is super important. Not just the story but who is telling it and why.

A big thank you to Victor Landa and NewsTaco.com for connecting me with The Media Consortium and its Executive Director Jo Ellen Green Kaiser who is also awesome.

2 thoughts on “Ten Things I Learned at #NCMR13”