The Fiscal Cliff Bill is a Big Deal 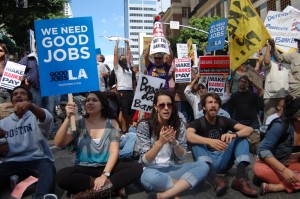 Passing a Fiscal Cliff bill that does not extend all of the Bush Tax Cuts for the wealthiest is a BFD.

The U.S. House of Representatives voted to pass the so-called Fiscal Cliff bill after a lot of negotiation. One of the things not included in the bill is a tax break for the top 2% of the nation’s income earners.

This focus on separating out the 1% and 2% of income earners is not a new concept. This is part of the same messaging that was used by the Occupy Movement and by many labor groups. With austerity being the soup du jour in Europe – and a failure – it has been important to redirect efforts from slashing services for the poor and working class to instead focus on making the rich pay their fair share.

“What, you want to chip away at entitlements and raise income taxes on the poor and working poor? Why not focus on the 2% who own 90% of the country’s wealth.”

This message has resonated over the year as the middle class and working poor continue to struggle and are attacked over and over again as the cause. The outcome is that Republicans not only voted for the bill, but they did so knowing that it would not include a full extension of the Bush Tax Cuts for the rich.

The next step is to reinforce that we don’t need austerity, we need job creation. If that means spending more on repairing decaying infrastructure, then that is what we need – jobs, not cuts.