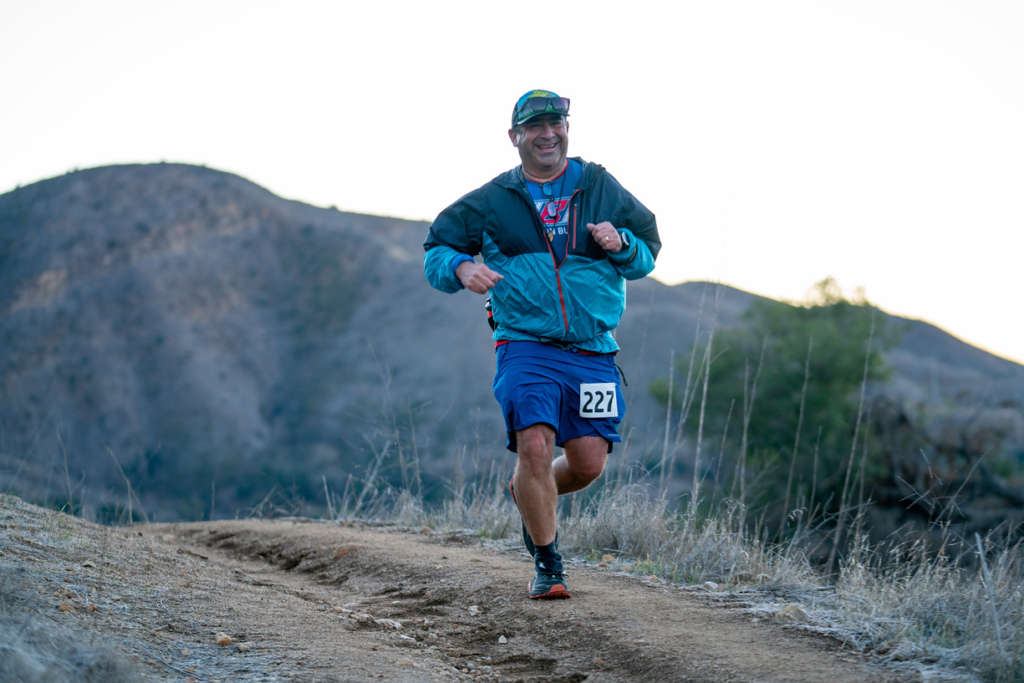 Race day was cold. Making the 45 minute drive to Paramount Ranch, my car’s temp read 50 something degrees but I’ve seen others post that it was in the 30’s and 40’s. The ground had frost on it so it was closer to 30, I think.

In the moonlit dark I arrived, checked out the loo then made my way to checkin. It was so cold I had trouble pinning my bib to my shorts. After seeing Christophe from our Ultrarunning Misfits group, I made my way to the car and waited for it to get closer to race time. The time had been pushed out by half an hour so that we ran in slightly warmer weather and a bit closer to sunlight.

Before race start I met up with Christophe, Ricardo, Nicole, Annette, and Stephanie and Guillermo was kind enough to take a photo of our group. I think all of us had on at least 3 layers of clothes for this chilly one.

As the race started I was mid pack and within a quarter mile the race turned into a conga line. “I told you this would happen,” I heard someone say. I vaguely remember this as well from the last time I ran this race in 2017 when I did the 10k. I have also done the Paramount Ranch half marathon before but that was held at Griffith Park after a terrible fire demolished 80% of the Ranch.

I was running with Christophe but about half a mile in he cranked up the speed and put a gap between us. The first little loop is around 2 miles long and after that we went back towards the first little aid/cheer station. My friend Daisy was volunteering there and she was great, cheering for all of us. We hit a straight away and overall I was in the mid to back of all runners. I forgot to mention that all runners started at the same time which is pretty cool.

I was feeling good and was able to run the flats and some of the little climbs and downhills. It was still too early to push so I kept a steady pace.

During the half marathon held at Griffith Park, I finished in 3 hours and 10 minutes which wasn’t too shabby a time for me. I did have a goal to beat that time even though it would be like comparing apples to oranges as it was a different course. So far, things were going well.

As the sun started to rise (I’ve been watching the show Sheldon so saying the sun rose sounds extremely inaccurate since it is the earth that is spinning to reveal the sun) I could see that there was still a light layer of ice on the ground and that actually made the mud underneath hard. This seems like a minor point but would have relevance later in the race.

I kept leapfrogging with about 5 or 6 runners. I slowed down a few times to take photos and then someone would pass me then I would catch up to them on the downhills. The course is like a clover leaf pattern and there are volunteers out there in critical junctions. At the beginning of the race I heard Race Director Keira Henninger tell us to follow the course markings, not the people in front of us. I assumed she was mostly talking to the front runners who could lost quickly if they all went off course. I assumed.

By mile 3 I was sweating buckets and all of me was wet. I was glad I had my light rain jacket on because of the cold but didn’t feel super comfortable. I was going to need to lose the jacket soon.

When I passed the photographer I was pushing hard but managed to smile still. I still had enough people just in front of me that I could zone out a bit and just follow them unless they slowed down then I would close in on the next person ahead. We made all the zigs and zags then I got to the part just before the start line and the end of the first lap. I checked my watch and it was around 1:20, not bad, I thought.

It was on to the second lap and I could see some of my buds who were ahead of me coming back. First I saw Annette and Ricardo, then Steph. I also saw my friend Robert “Latin Heat” Manon coming back and said hello. I think I first chatted with him after the Paramount Ranch in 2017.

After a few minutes we were done with the loop and we passed Daisy and the crew there again. They were still cheering everyone on. After the straightaway and the first climb after that, I saw Nicole on a trail below and figured she was about a mile and a half ahead of me. I kept cranking and there was a gap between the people who were just ahead of me now. I got to an intersection and there was a volunteer in a warm looking onesie (a cow onesie?) and I passed him and kept going.

Mile 8 to the finish

As I continued, I quickly noticed that the trail didn’t look familiar.There were no course markings for a quarter mile and the only prints were those of horses. I figured I would give it another bit and see if there were any markings.

A half mile in, I saw a course marking at an intersection. I didn’t remember doing a climb there so I kept going. Now things looked familiar but something was wrong. I saw some runners and they were coming down that intersection and I remember that they were way ahead of me. Then a few moments later, Annette and Ricardo came up from behind and I knew something was off. They said Hi again and I told them I must have made a wrong turn.

So I made a 180 and went all the way back to the volunteer in the onesie. Just before getting to him I saw where I had missed the turn. I told the volunteer what had happened and he said I should just keep going on the path next to him. He didn’t know how far I had gone off course but I figured I was off on distance by at least a mile or two. I got back on the path and headed towards the end of the loop. After another mile I was back to where I had turned. I kept going and figured that I would either have them count my time and have it set as the 10k race or I would do a mile long out and back before crossing the line.

As I approached the finish line I told the timer what happened and then we both saw Keira and I went to see what she recommended. She said I should continue and do the first little loop then cross back to the finish line. So that’s what I did. I saw Annette and Ricardo again and told them I was doing the extra segment to make up for the part I missed and I kept grinding. I’m sure those who were running near me before and were doing the 30k or half or 50k were wondering what was going on. But, oh well. I had my race to finish and my secret goal of finishing the half marathon with a “2” as the first digit was fading quickly.

I had taken a Gu just before the last little loop but as I started one of the bigger climbs in the area, I started to feel super fatigued. I was trying to push but the body wasn’t kicking into a higher gear. Other than the disappointment of going off course, this was the only other low point in the race. I finished that little hill and saw that one of the speedy guys who had passed me a bit of go was coming back onto the same trial again. He had taken a wrong turn there and was finishing up the little loop. That made me feel a little better as it wasn’t just me that had gone off course.

I was able to pick up the pace again, passed the aid station and explained that I was making up mileage and headed in to finish the race.

There was a “3” in the race time but the 3:05 time was a Paramount Ranch half marathon PR and quite frankly, only a few minutes off my fastest half marathon time in over 5 years. So, I’m happy with the time but a bit bummed that if I had not made the wrong turn and wasted a little time scratching my head there then taking a few moments to figure out how to proceed with I got to the finish line the rest time, that I would have indeed seen a “2” in the first spot.

I can’t thank the race organizers, volunteer and park staff (my cousin was working the event as part of the National Park service) enough. This was a well organized race and I had a blast.

My biggest takeaway is that I need to frigging study courses more and also that I need to dial in my gear.I did see one runner drop off a layer of clothes at their car when they passed by and I would have done that as well but wasn’t sure if that was allowed. It might have helped me shave off some time.

My next race is in a couple of weeks, the Sean O’Brien Marathon. I had a great 30k race there in the fall and am hoping to have strong marathon there, something that has eluded me the two previous time I completed that distance.

What’s on your race calendar? Let me know if you’ll be at Sean O’Brien and we’ll take a safe selfie. 🙂