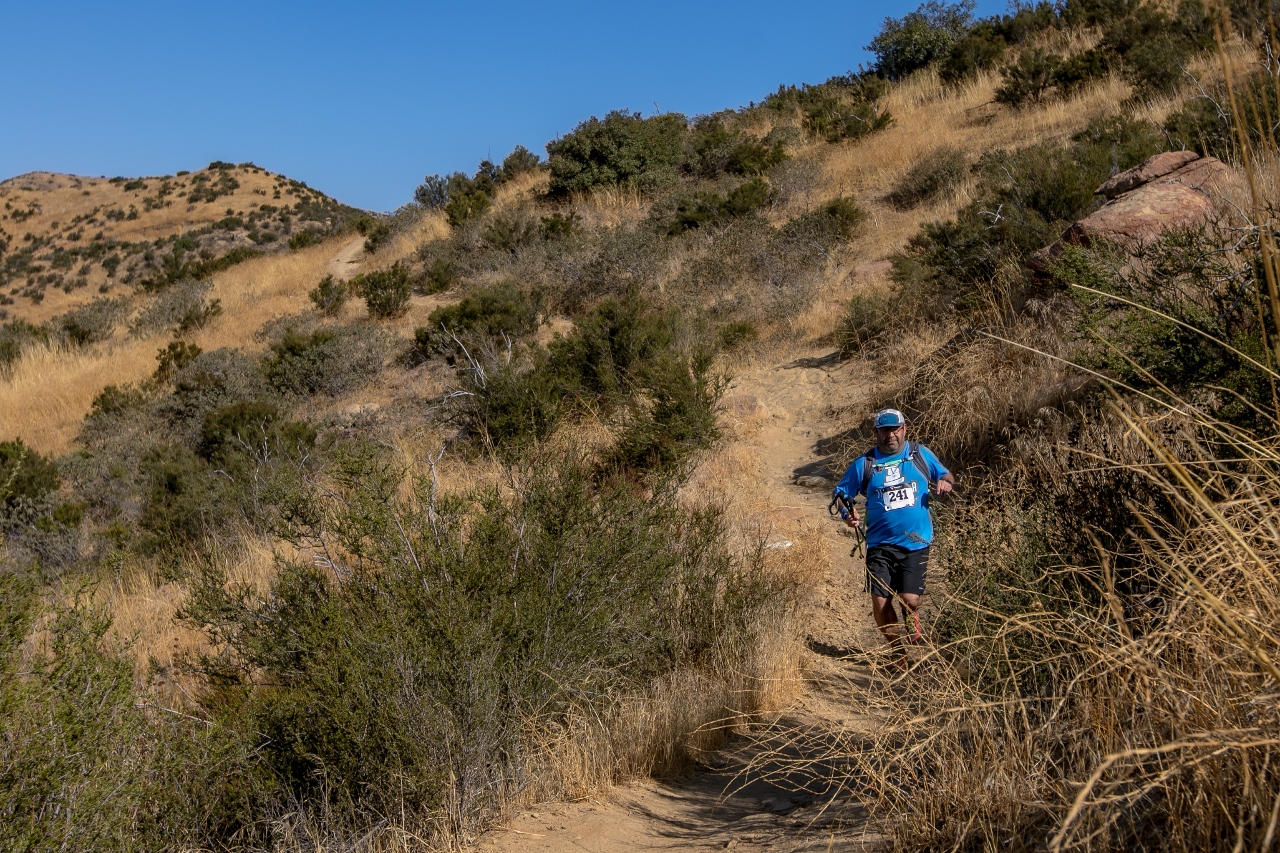 I promised you some details on my last “race,” the Rocky Peak 30k in Simi Valley. I put that in parenthesis because when it came to setting goals for the day the only one I set was to enjoy the company and the trails. That sounds a little corny and maybe even disingenuous if you are the suspicious type but that’s all I wanted from the day.
“You could have done that with a nice long training run,” you might say. Well that’s true but I wanted to get out there and have more of an experience.
I knew I was undertrained and that it would make for a tough day. With thousands of feet of race elevation gain and temps in the 90’s “tough” is an understatement.
Have you ever gone to do a race and doubted that you would be able to finish it for any reason – too much elevation, running hurt, not enough long runs, too friggin hot, etc.?
Well, that’s what I did so I didn’t expect to finish the race. That thought wasn’t even in my head.
But, through the first aid station I felt really good because I was taking it nice and easy. I had my trekking poles and was eating and drinking water. After leaving the aid station it was a big downhill section and I love downhills and can make up a lot of time.
But I still took it way easy and hiked down. That’s where the heat started getting to me and just before the second aid station I was already way behind on calories and hydration. When I hit the street portion I was nauseous and almost upchucked on someone’s nice BMW.
When I got to the second aid I was feeling lousy and had half a mind to quit there. But I still had something in the tank and figured I’d see if I could make it to the next aid station and fold there.
As I made the long trek up the back side of the mountain I was hiking just in front of Patricia Devita. “We’re not going to make the cutoff at this pace,” she said with concern.
“Yup,” I replied.
“We only have a couple of hours and still have some big climbs,” she continued.
“Yup,” I repeated. I didn’t want to get into the whole subject about being out there for the fun of it because the idea of it was starting to sound stupid and I was pretty tired.
Patricia started digging in, passed me then continued to put a gap on my snails pace. At this point I figured I’d be all alone but 50k runners were still behind me and were pushing hard to make the same cutoff. Most of the 50k runners were in the hurt box but they pushed on. That was inspiring but it still didn’t make my own pace push any harder. In fact, I was thinking that I should just give up trailrunning since I’m not even motivated enough to train for the frigging races that I enter.
Then the big climb began and a Sheriff ranger truck pulled up on the way down. He asked how I was feeling.
“I don’t think I’m going to make the cutoff,” I told him, looking into the truck and wondering if the AC was as marvelous as I had imagined it.
“Don’t worry about the cutoff time.. these are big mountains and there is still a lot of climbing to do. If you keep going and feel like crap just stop by the big oak tree and I’ll get you on the way back,” the Sheriff dude said. He also mentioned something about a water drop then drove off.
“Wait a minute, “ I thought to myself. “ I know how big these mountains are, I climbed the other side of this thing four hours ago!”
Yeah, that pissed me off and then I started digging as well to make it back up The Big Mountain. 50 k runners kept coming and were were all pushing. One mile down. I kept going at it and I could see Patricia up ahead again. She was still working hard. Two miles down.
Then the truck came back up the mountain and drove next to me and instead of trying to zoom into the truck for comfort I kept pushing. The truck caught up to Patricia who had just stopped momentarily in a downed tree to catch her breath. The truck slowed and Patricia waved him on to go about his business. TOUGH AS NAILS.
I kept going then pulled over to puke my guts out but I didn’t have anything in me except a little pink bile from when I tried to eat a couple of licorice sticks.
I continued on and finally made it to the top of the hill – but whatever motivation I had to prove to the Sheriff dude that I could make it up the big mountain waned and I basically walked it in to the aid station, 3 minutes after the cutoff and my race was over. I had set another goal, reached that small goal then tapped out.
I wish I had wanted to finish the race as much as everyone around me did.
When I got back to the finish line after getting a ride down I saw a few of the runners who had hauled butt to make the last cutoff finish the race just in time. I knew some of them from following their Instagram accounts.
I think Patricia had already finished by then. Patricia is 83 years young and knows how to get the job done.
Thinking about the day has inspired me to build my training and look at setting specific goals.
I didn’t mention it at the beginning of this post but leading up to the race I had been struggling to rekindle the training fire. I think that problem has been fixed for a long while.