#OAKLANDVOICES Reaches Out to FCC Chairman Wheeler at Town Hall 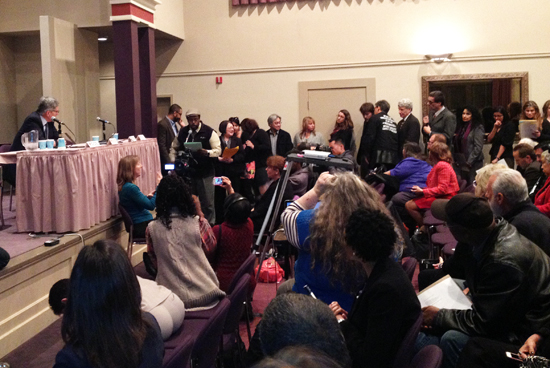 Federal Communications Commission Chairman Tom Wheeler made his first town hall appearance since being appointed to the role by President Obama some three months ago. Chairman Wheeler attended the Oakland Voices (hashtag “#OaklandVoices”) town hall in Oakland on Thursday, January 9 in front of 100 community activists and reporters. The standing-room-only event took place at Preservation Park in downtown Oakland and was organized by Voices for Internet Justice, a collaboration of almost 30 organizations including The Center for Media Justice, Free Press, ColorOfChange and the National Hispanic Media Coalition.

The event was true to its billing, many voices with different issues spoke up to point out that people of color are often left out of the decision-making process, yet often disproportionately impacted by FCC decisions and practices.

Center for Media Justice Executive Director Malkia Cyril (@culturejedi on Twitter) set the tone by making sure it was clear that this was a community event, not an FCC event.

Several speakers spoke up in support of the Universal Lifeline program, a state and federal program that helps low-income families access phone services at a discounted rate. California Public Utilities Commissioner Catherine Sandoval pointed out that in California residents are required to provide the last four digits of their Social Security Numbers, creating a barrier to undocumented residents, even though “telcos” are happy to have them as regular subscribers, regardless of their documented status. Sandoval urged Commissioner Wheeler to remove the SSN requirement.

Another issue that came up was that of the ridiculously large telephone charges for calls from prisons. Christina Mansfield of Community Initiatives for Visiting Immigrants in Confinement (CIVIC) pointed out that many detained immigrants are held without representation, and the additional high costs of making phone calls puts them that much further away from getting fair treatment in our prison and justice system.

Edyael Casaperalta from the Center for Rural Strategies spoke up during the community question period about broadband access in rural areas. As someone who lives in a rural area, I certainly agree that we have fewer broadband options than urban areas.

There was also a group of protesters who were there to speak out against the harms of wireless radiation. One protester wore a Grim Reaper costume and another wore a giant cellphone outfit while holding a “No Humor In a Brain Tumor” sign. 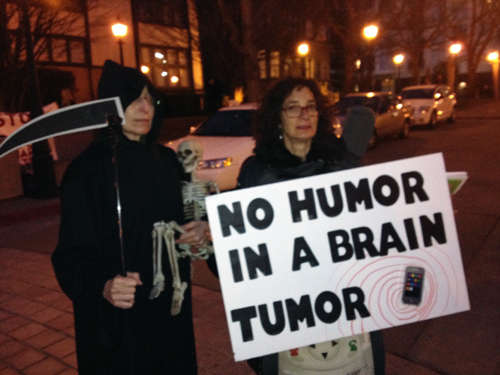 All in all, about 20 community members took to the microphone and voiced their concerns. Afterwards, Chairman Wheeler showed that he was paying attention by commenting on a couple of speakers and their issues.

In Wheeler’s final statements he didn’t reveal anything in terms of his position on the Open Internet or what he plans to do in the future in response to an upcoming U.S. Federal Court of Appeals decision in Verizon V. FCC.

I listened in on several conversations after the town hall let out and most were asking whether this really made an impact on Wheeler in regards to any future decisions. The way I look at it, Wheeler showed up to meet with active community members and that is a good start. Will he care? Community organizers across the nation will have to do their work and make him care.