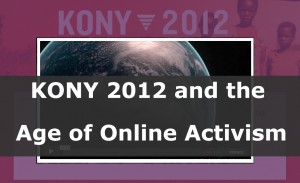 The KONY 2012 campaign is a great example of how people can come together to raise awareness on an important topic.

I work for a labor organization and a great deal of the work we do is tied to feet on the street. We organize people and money for the benefit of our members and society. When it comes to doing online activism, this is still something that is new in the social justice arena, with rare exceptions.

Yes, it’s easy enough to create a Facebook page or a Twitter page and send out an email now an then. But those types of efforts rarely have a major impact when they are done as items on a check off list and not as a significant and urgent component of a campaign. The KONY 2012 campaign does just that.

The KONY 2012 campaign includes a strong narrative in regards to the devastating effects of children being recruited into a personal army and it uses new media to help get the message out. At the time of this post, the KONY 2012 video has over 43,300,000 views on YouTube, is filling up Facebook timelines, and is trending on Twitter with the “Uganda” and “Invisible Children” terms.

The social media blog Mashable just did an article where it questions whether the KONY 2012 campaign is a scam and whether it encourages “slacktivism”, armchair activism. I haven’t vetted the Invisible People organization but unlike many armchair critics, I did at least view the entire 30-minute video.

At this point in the campaign, the Invisible People organization has to firmly speak out on the scam charges in a transparent manner then quickly move forward with its goal.

I’ve gone through this process before on an online campaign. It wasn’t pleasant but eventually the online community was able to get aligned behind the truth.

Yes, I’ve left out some details on the campaign and now you’ll have to watch the video to see what this is all about.

Has your organization or business had success with viral videos? I’d like to hear about it in the comments and also hear about what you think of the KONY 2012 video.