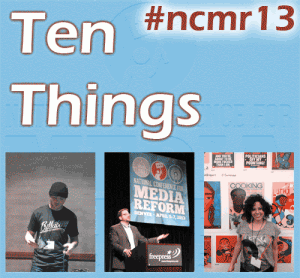 Hundreds of media activists made their way to Denver for the National Conference on Media Reform this past weekend. This was my first time attending the conference and really my first major exposure to the media reform community. I’ll be blogging more about media reform in the weeks to come but I wanted to share some of what I learned before I forget the details.

When Mexican presidential candidate Enrique Peña Nieto visited Mexico City’s Ibero University he encountered a large group of angry students. Students linked the Institutional Revolutionary Party (PRI) candidate to former Mexican president Carlos Salinas de Gortari also of the same PRI party and called out Peña Nieto on his being governor during a bloody crackdown on students in the state of Atenco.

News clippings from yesterday’s historic announcement by President Obama on the new immigration directive to allow some DREAM Act eligible youths to stay in the US without fear of deportation.

Sent from my iPhone

Facebook quietly pushed out a new Pages Manager App for the iPhone with little fanfare. The application is made for Facebook page administrators, especially those who manage multiple pages.

In early 2012, Anastasio Hernández-Rojas was beaten and tasered by border patrol agents on the US Mexico border near San Diego, a beating that would lead to Anastasio’s death. Articles were written about the event, including one in the New York times, and standbyers recorded video of the event and posted them to YouTube. Then, nothing happened.

An historic blizzard in blasting the Northeast and is shutting down air travel, affecting emergency vehicle response rates, and forcing many to stay indoors. Two Twitter Superstars, Cory Booker and 50 Cent have very different approaches to dealing with the resulting blizzard crisis.

Ever wonder if it’s really safe to use location-based sites like Foursquare or Gowalla? The new site PleaseRobMe.com is trying to make a point by listing people who are checking in somewhere other than home via Foursquare.