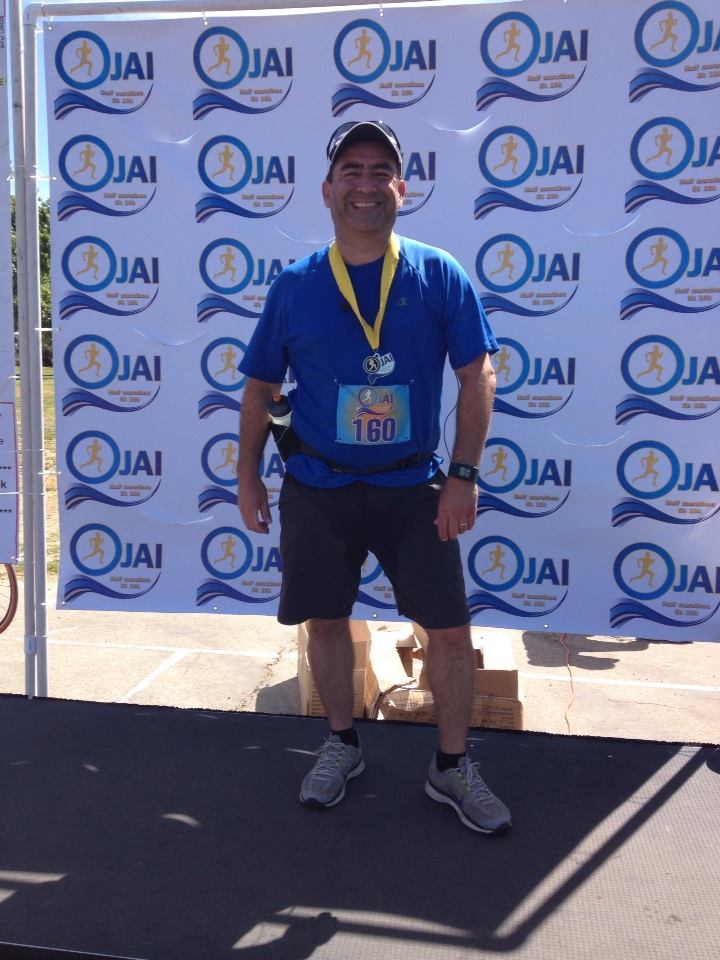 As part of my training for this race, I ran the last 3 miles of the race on one weekend and ran the larger loop part of the course last week. I’m glad I did the training runs and tracked my heart rate because it helped me create a plan of attack for the race.

The Course
The race starts at a small elementary school just outside of Ojai then it heads down parallel to Ventura Ave. on the Ojai bike trail. The race course part of the path goes down for about 3 miles then it turns onto Santa Ana Blvd. for another half a mile. This entire portion is downhill. When I first started the race I quickly ended up running next to the 2:30 pacer but about a half mile into that I felt that I could go faster so I separated from that group.

At 3.5 miles in the downhill fun was over and it was time to make the right turn onto Santa Ana Rd. When the race director, Bill Escobar, reviewed the course before the race he noted that there indeed was a little store just past that corner and it did sell beer but we were to ignore it and keep going up the hill. The hill had an elevation climb of 202 feet in just under a mile. I set my Nike Sportswatch to monitor my heart rate and went into run/walk mode for this portion of the race. This rambling uphill portion of the course continued for another 3 long miles.

The good news on this portion of the run is that there is a great view of Lake Casitas and it does eventually end. I was a little surprised that the 2:30 pacer still hadn’t caught up to me yet. From miles 7-9 there were more rolling hills until the course got back to a continuous incline. The pacer finally caught up around mile 8 and I followed her for a bit but the rolling hills took their toll on my quads and I spent a little more time walking through each water station.

By mile 9 I realized that I was on a pretty good pace and still had some strength. Just after mile 9 we turned back up the Ojai trail, back up the hill that I had zoomed down at the beginning of the race.

At mile 10 we passed the little school where we had started the race and where I would finish. The course continues up the Ojai trail and you can start to see racers who are on their final stretch. I was running and walking some by this time. I started cheering on everyone who was heading down towards the finish line and that made that portion more bearable. I also stopped around mile 11 as an older gentleman had crashed his bike on the side of the bike trail. I stood by to see if he needed help as another runner held his bike. He got his balance back and was able to get back on his bike and head off.

The majority of the race isn’t actually in Ojai. You only get to Ojai during these last couple of miles of the course. I finally reached the little turnaround. I still felt pretty good but was also monitoring my heart rate. I started to zoom down and felt that I had plenty of legs left for the final 1.5 miles. During the last mile I had started to pass a good number of people and in the final downhill section passed a couple of more. But my heart rate was zooming to 181 which I figure is 99% of my maximum heart rate. My legs still felt good but I was worried that if I let my heart rate get any higher that I might start to fall apart and who knew what that could lead to. I had to slow down and walk a little to get the heart rate down then I kept on running hard.

Just as I got to the turn to head into the school and the finish line I saw that there was a runner down. There were several people tending to her so I kept running, making the last two turns into the school then across the finish line in 2:35. While I was doing the last mile and a half and worrying about my heart rate, I decided that this was not going to be the race where I saw what would happen if I ran beyond my maximum heart rate, even in the last mile. I’m not sure what happened to the runner who was down (she got back up and finished the race a couple of minutes later) but I figure that might have been the answer to my question. I had already been feeling over heated and I could have easily gotten myself tangle up with someone else on that turn. Who knows.

After crossing the finish line I got some bread and a piece of a banana then started stretching out my calf muscle. I also did other stretches and did a yoga stretch where my feet are spread out then I reach to the floor and stretch out but the blood rushed to my head and when I managed to stand up again it looked as if someone had set a bright Instagram filter on everything. I felt a little dizzy. I had been stretching against a handball wall and leaned back then saw the medical tent. I started taking deliberate steps toward the tent just in case things went downhill but after a few steps felt better and the brightness went back to normal. I had some Gatorade and was able to get around OK.

The Stats
I ran the half marathon in 2 hours and 35 minutes which is 13 minutes faster than I ran the Santa To the Sea race. Yeah, a PR! I thought I’d be able to PR on the course but the rolling hills didn’t make it a given, despite the number of hours I’ve put into running over the past 4 months.

Here are my mile splits:

Training Notes
During the longer training run I also had some trouble with the rambling hills, even during some of the downhill sections. Was I running out of gas from a lack of nutrition? Was it that I had mostly trained for shorter distances the last couple of months even though I was doing tough intervals? Was it that I hadn’t actually run a full 13 miles straight before? During my longer 13 and 18 mile training runs for the Bandit 30K race I had to power walk the massive mountains so I wasn’t actually running the whole way.

There was nothing I could do to address the lack of recent long run training so I focused on nutrition and made sure to ingest GUs along the way and to drink water to wash it down. That helped me have some energy left for the final downhill run to the finish line and to help keep me going when other people around me started to drop away.

I had posted the question on Facebook as to how I would fare without having done recent long runs and got some responses that the slow moderate runs should always be part of the training for longer distances. I agree and would have done it had I not been training for the running portion of the Camarillo Duathlon for those couple of months.

All in all I am happy with my performance and am still improving. A year ago today I was more than 30 pounds heavier, was in poor shape and had diabetes. It’s been a long road and I’m loving the running. I’m going to look for another half marathon on a flat course somewhere nearby then will start to look either at a 30K trail race or for a full marathon also on a flat course.

Did you just run the Ojai Half? How did it go? #getfit