Training For My First Half Marathon #getfit 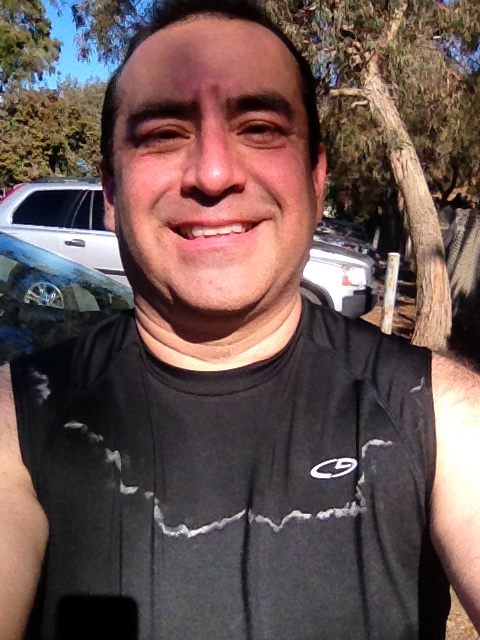 After losing 40 pounds, controlling my diabetes and running/cycling in a sprint duathlon, all in a few months time period, I ran and finished my first half marathon this past Sunday.

5 weeks ago I decided to run in the Santa To The Sea race which includes a half marathon and relay, 5K and a fun 1K run. Several people told me about the fun race to help local charities and provide presents and scholarships for local kids and I was in. My nephew wanted to run with me so I signed up for the 5K. I figured this would be a chance for me to work on my speed as I trained for the 2014 Camarillo Duathlon series.

I started running with purpose but didn’t have a specific plan. I just wanted to get out there and see where I was. After a few days it became clear that my nephew wasn’t ready to jump on board the race and I had other friends ask why I wasn’t doing the half marathon.

I thought back to the sprint duathlon in October where I ran 5K and cycled 11 miles. A half marathon meant I would run the entire distance. And, I would only have 5 weeks to train and be able to be on my feet up to three hours for the long 13.1+ mile race. It sounded like a good challenge so I switched my registration and signed up for the half marathon.

The Training Plan
The first thing I did was to start looking around for a good 5-week training plan. I found some great training tips on several different sites and the biggest takeaway was that I should take at least 10 if not 12 weeks to prepare for the race.

I took the best practice tips from different sources and put together a training plan that I thought would work for me and my work schedule. I wanted to build the running habit so I would run at least 3 times a week a minimum of 3 miles and do a larger run on the weekend.

On Week One, I started with a 3 mile run on Tuesday, a 2 mile run on Wednesday, a 3 mile run on Thursday and a larger 7 mile run on Sunday. The initial plan was to get me to a maximum big run of 11 miles. Running wisdom said that if I could get to 11 miles then “the spirit” would carry me to the end of the race. But, at the same time, I kept hearing about people who did a full 12 week training plan and only got to 10 or 11 miles and ended up hitting a wall at 11 miles during their actual race. I didn’t want to hit the wall so I decided to accelerate the accelerated plan and increase the big runs by 2 miles each week until I did the full 13 miles.

By Week Three, I was doing mostly 3 and 4 mile runs during the week and then I made the mistake of making too many changes during one run. I wore new running shoes, tried to reduce my heel strike, changed my arm swing and BLAM, felt a jolt of pain shoot up my calf. I was at mile 1 in that run and immediately turned around to head back to the car. As I hobbled back I felt a little better and even tried a light jog but felt the sharp pain again. I thought about whether I should go straight to urgent care and have a doctor look at things.

I started googling around and self-diagnosed myself with a minor calf tear. After going to work for a few hours, in pain, I decided to go into the doctor’s office and have it looked at. My regular doctor was unavailable so I saw a different doctor. We had some issues communicating effectively and my diagnosis was someone unclear. Was it an Achilles strain? I wasn’t clear but was given instructions to get off the leg and apply RICE – rest, ice, elevation and compression. I took the advice and went home to get some rest.

I was very disappointed that I had rushed things by trying to make too many changes at once. After a day of TLC from my wife I was feeling much better the next day and made it into work with an ice pack and ankle support that covered some of my calf. I kept checking running sites and figured that it was simply a calf strain. A couple of days later I was able to do a short run but took off several days from running and missed my third long run day. By the next Tuesday I went back to the training plan and took things easy. By the end of the week I didn’t feel any pain and went out for a long weekend run which was largely without problems.

In the Zone
A large part of my training strategy was to focus on my heart rate while training. I’ve heard good and bad things about using heart rate measures for training but because I’m still on a fitness journey from couch to an active lifestyle, I figured that would be the best approach. So for all of my training I kept things simple and made all of my runs at an easy pace. This is sometimes referred to as being at a “conversational pace” because you should be able to run and still have a conversation with someone.

I also used a heart rate monitor and only ran and walked hard enough to keep my heart rate in the 130 beats per minute (BPM) to 160 BPM range. This is a pretty broad range but is towards the lower easy range. 85% of my workouts were in the 135-145 BPM which often meant that if it got too close to 160 BPM that I would slow to a brisk walk. This run-walk strategy helped me increase my time on my feet, keep expanding my long weekend runs and kept me from getting re-injured.

There are a lot of complex theories on the different training zones and whether or training by heart rate is the best way but it served my training needs so I went with it and was very consistent. It was difficult to stick to it when I felt great running and wanted to “open it up.” I had to reign myself in. When my ego tried to jump in and wanted to go for some speed, I reminded myself that accomplished ultra marathoners often use this same easy pace training strategy to be able to run massive distances. This approach has really helped me improve my endurance engine.

The weekend before the half marathon, I did my last long run and ended up doing 14 miles. I wanted the psychological edge to be able to know that I could do the whole 13.1 miles and then some. I took it easy the last week and tapered the last few days to rest up for the big race. I’ll share the race highlights with you in my next blog post.

Keep in mind that I am not a running trainer nor do I intend to portray myself as one. Training for and running the half marathon was massive challenge physically and mentally. Besides the period where I recovered from my injury, I only missed one workout (not by choice) and increased the length of some workouts. I found myself really loving to run and have been soaking up running wisdom and information everywhere I go.

Besides the personal satisfaction of knowing that I was able to create a plan, stick to it and accomplish something I would have thought almost impossible a few months ago, it has been great seeing others inspired by my training and seeing them become more active. I use the #getfit tag on Twitter and Facebook whenever I did a run so feel free to check out those microposts.

Are you training for a run? I’d love to hear about it.