It’s been a busy two weeks, first with going to the National Media Reform Conference and then participating in the California State Democrats Convention in Sacramento. When I finally got back to the office everyone asked me “how was it all?” so I thought I’d tell all of you.

I already gave you all my top 10 learning points from the National Media Reform Conference so I’ll quickly review my highlights from the Dems Convention.

Tourist
This is only my fourth trip into Sacramento (the other three were all same-day visits) so we drove in a day early to have a chance to recuperate and to check out the sights. One of my Twitter friends who used to live in Sacramento suggested I check out Old Sacramento and specifically a shop called Evangeline’s. It was a cool shop and I bought a handful of zombie buttons which I shared with my family, much to their glee.

Delegate
I was very fortunate to have been appointed a delegate by State Senator Hannah-Beth Jackson. This is my first trip to the Democratic Convention and I have worked on many Democratic political campaigns in Denver and in California. I’ve knocked on doors and made many phone calls for great candidates over the years. I’m glad Senator Jackson reached out and connected and helped bring more diversity into the Dems Convention and the state Democratic system.

Caucuses
The caucuses are like giant family gatherings. Many people know each other and there’s an occasional “food fight” of ideas and positions. I participated in the Veterans, Labor, and Environmental caucuses, especially to support Ventura County representatives Shawn Terris and RL Miller. I’m glad to report that RL Miller is now the Chair of the Environmental Caucus.

Here’s a snapshot of the packed Environmental Caucus meeting.

Red to Blue Luncheon
This luncheon celebrated new members of Congress who turned their voting districts from red to blue. I’m proud to have helped turn my district from red to blue by helping to elect Julia Brownley, the first Democrat to win Congress in Ventura County in 70 years! With redistricting, the district had the chance to go blue but it took a lot of outreach to new communities, especially the Latino community. My colleague Danny Carrillo attended as an appointed delegate of State Assembly member Das Williams and another colleague Laura Espinosa is an elected delegate. They are pictured below with Congress woman Julia Brownley. 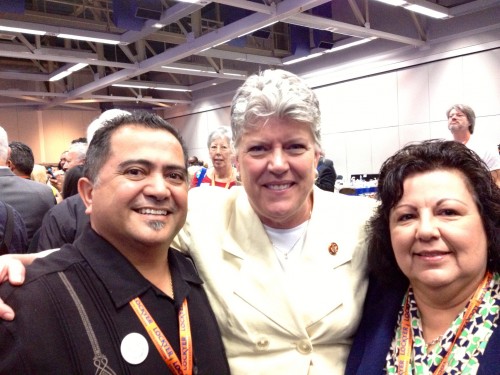 Another highlight of the luncheon was getting to hear the stories of Congress members Raul Ruiz who grew up in adverse conditions and still earned three degrees from Harvard and of Congress member Mark Takano who became the first openly gay member of Congress in California and did so in conservative Riverside County.

Daraka!
One of the biggest highlights was being there to vote for Daraka Larimore-Hall for Secretary of the State Democratic Party and then victory!

Tourist Part Two Sometimes magical thing happen while exploring a new town. I was on my way to one of the many Convention parties when a huge group of bicyclists rode by.

Friends
The last but not least highlight was being able to reconnect with old friends like former colleague Carla Castilla and make some new acquaintances who could become friends. I also had a chance to finally meet Adriel Hampton who I have been following on Twitter for many years. We ended up sitting at the same table at the Emerge California Tweet Off event. Birds of a feather…