Vine is Ready for its Close-up, Mr. DeMille 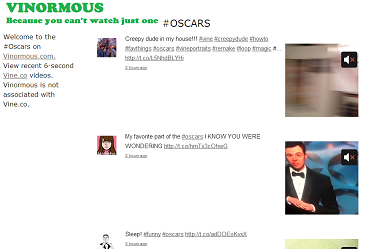 Like Alice going into the rabbit hole, I’ve become so addicted to and curious about Vine videos that I created a viewing platform, Vinormous.com. Vinormous, allows you to get your fill of 6-second Vine videos which have been posted to Twitter.

For Oscars night, I created a special Vinormous channel that screened for #Oscar hashtagged posts. The result was a fun collection of Vine videos with people having Oscars parties, creating special treats named after films up for awards, snuggling with popcorn and their trusty furry friends.

I shared the link on Twitter and Facebook and one Facebook friend was confused because he thought I posted a link to stream the actual Oscars show. “What is all this crap?” he asked. This reminded me of my first impressions when I first ran into Twitter tweets off of a Web search many years ago. There are still a lot of people who don’t get Twitter so it’s easy to see why people don’t get Vine.

Brands and auteurs are beginning to understand the power of Vine and they showed it on Oscars night.

The Academy posted this Vine video and tweet before the Red Carpet portion of the evening.

A snippet of the action in the #ArchDigestGreenRoom at the #Oscars with @amc vine.co/v/bg6YibPhgat

But it wasn’t just about big brands breaking in a new platform; it was also about you and me getting ready for the festivities, as in this tweet and Vine video.

As the Oscars got started, people started recording snippets of their TV’s and the actual Oscars. With DVR’s some of them were able to create looping blooper reels of celeb wardrobe malfunctions, gaffs, trips, and crazy facial expressions trying to open those darn envelopes.

As the Vine platform continues to evolve, more and more people will explore and play and brands will invest time and money. Apparently some brands even commissioned Vine videos as well.

If you’d like to find more Oscars-related Vine videos, follow me on Vine (jesseluna) and check out my “Likes” from Sunday night.

Did you “Vine” the Oscars?