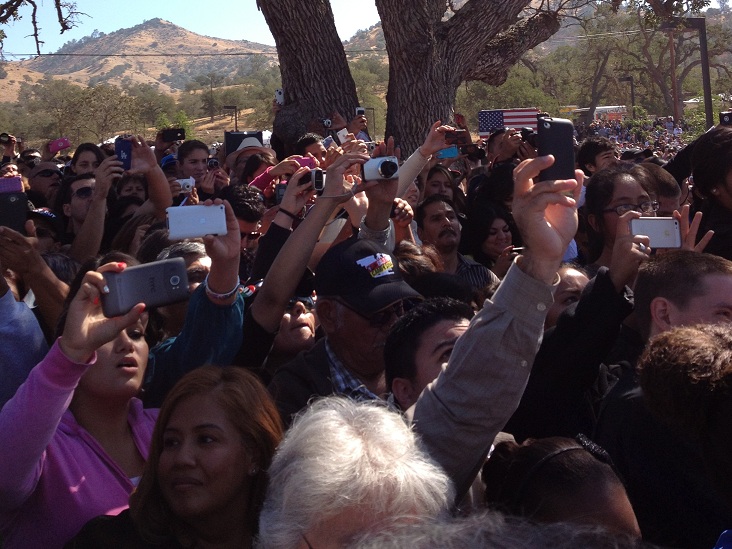 This election season, voters accessed candidate and proposition information in many more ways than in previous years.

We still received the stack of campaign literature in our mailboxes, were exposed to a barrage of ads on our TVs and received more than our fair share of after dinner phone calls asking for our support, money and time, but there were a few new “touches” added to this year’s election material mix, many on social media and mobile platforms.

Election information in Social media ads
We saw ads on our favorite social media networks like Facebook pushing for candidates and causes. It was difficult to avoid them even if we tried. I heard from one community organizer who said that some ads had already reached a “saturation point” and really didn’t need to run any longer. In other words, he was sick of seeing the ads even though he and his organization were actively campaigning for that issue.

Why advertise on Facebook? It also helps that Latinos almost out-index every other ethnic groups on Facebook and Facebook makes it easy with a somewhat new “filter by Latinos” ad feature. I’m still not sure what that “Latino” algorithm looks like, though, on new media sites in general. Facebook recently hit the one billion users per month mark.

Online memes
This election we saw a flurry of image memes on sites like Facebook, Twitter, Pinterest, and more. Every time we saw a photo or tweet, we had the opportunity to shareit. At SEIU 721, we created a set of memes featuring our members holding “Yes on 30” and “No on 32” signs. We posted dozens of these photos and our members and community allies helped circulate them across the Web with Like, Shares, and Retweets.

This screenshot of the SEIU 721 Facebook page shows the “No on 32” meme that we created on the right and a snapshot of the “No on 32” mobile phone application that was created by the LA Labor Federation. The mobile app allows the user to put tape over one’s mouth in the photo to convey the concept that Proposition 32 would silence the voice of working people. (Yes, that is labor leader Dolores Huerta in the photo on the left.) 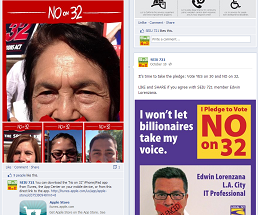 Another satirical piece was the “Mitt Romney Style” video by CollegeHumor.com which went viral.

Mobile Outreach
Just as Latinos out-index most groups on Facebook, we also use mobile phones more than other groups. According to a 2012 Nielsen study, “Overall, Hispanics are 28 percent more likely to own a smartphone than non-Hispanic Whites…”  In fact, for many Latinos, smartphones are a key part of personal access to the Internet.

In this election, mobile outreach included mobile ads on apps and social media sites and it also including texting. A texting service was provided by different campaigns to provide periodic updates, to alert people to new events and actions,  and for the final Get Out the Vote push on election day.

MomsRising.com had its own texting subscription set up. This is an example of how MomsRising.com engaged subscribers during the Republican National Convention. 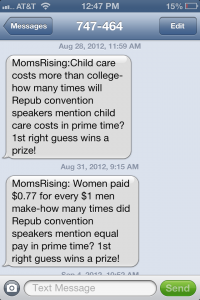 This iPhone screenshot below shows some of the texting interactions received in the final day.  (Um, I accidentally texted to the SEIU 721 account instead of my wife when I typed in “pizza?”) I used the “find your polling place” feature and texted “VOTED721” to the account once I did vote. 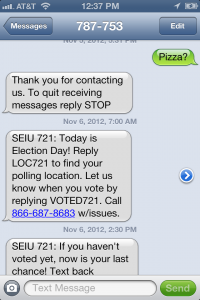 For this election cycle, most texting campaigns were tests for future campaigns.

As someone who was involved as a volunteer in the offline as well as online aspects of the campaign, I look forward to digging through the data to see what really worked and what needs to be improved. New opportunities to connect with all voters will arise with new technologies. Latino voters will continue to benefit from greater and easier access to political information.

If you felt you were engaged in this previous election cycle, what technology methods helped you connect with your candidates or causes?

Latino Voters in the 2012 Election