Looking back 20 years on the #LARiots 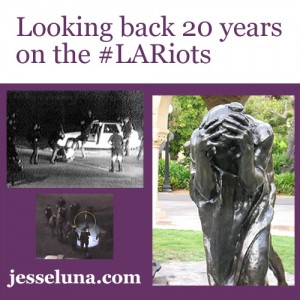 Twenty years seems like a long time. So many things have changed since the day of the Rodney King verdict and the LA Riots.  In 1992, the World Wide Web was a baby, having only been invented some 17 months earlier. Email was around, but only a very select group of people were using it.

Yet, politically, I feel like we’re right back at that time.

In 1992, I was living on the Stanford University campus with my wife who was finishing up her degree. I was teaching middle school in nearby Redwood City, taking classes at Cal State San Francisco, and had a second job teaching Migrant Education.

I don’t remember the exact moment by moment details of that Wednesday April 29th day in 1992. What I do remember is the outrage and desire to get out and do something. I didn’t know what, but I had to get out.

By the early evening, reports of rioting were popping up in the news. Reports were coming in from Los Angeles and from San Francisco where people had mobilized to shut down a major freeway.

I remember a phone call with my brother.  Buildings were burning in my hometown of Pasadena, blocks from where I grew up. The Asian-owned liquor store where I bought baseball cards (and, later beer) had been set on fire.

We had to get out and we eventually connected with a large group of Stanford students who felt the same outrage.  We gathered and peaceably walked down the couple of miles to Palo Alto’s City Hall plaza near the police department. Several university and community leaders spoke to the crowd of about 100 students and community members.

The walk and ad hoc rally helped calm me down that night and I had to teach the next day so I went back and watched news coverage for the rest of the night.

Much of the coverage of rioting and organized actions had me shaking my head.  A grave injustice had been perpetrated and in return people were trashing their own neighborhoods. Shutting down a freeway was an organized action.  Beating random drivers because of the color of their skin and bad timing was a random act of violence.

Shortly after the rioting, Amiri Baraka, playwright and activist, spoke at Stanford and I attended.  I’d majored in African and Afro-American Studies, so I knew about Baraka and loved his play “Dutchman,” a brilliant cautionary tale about race relations.

The “LA riots” were not random actions, they were community rebellions against many years of oppression, Baraka said. According to Baraka, it wasn’t a coincidence that people were lashing out against specific targets like liquor stores.

I also remember a part of Baraka’s speech where he likened the LA insurgence to the rising of the mythical phoenix.  The phoenix rose in flames.  Maybe what LA needed was for the fire to continue to burn, he posited.

I was intrigued by his presentation but horrified by the notion that random acts of violence were in the larger interest of the community. A few months after the verdict, we moved to Long Beach and saw how droves of people had left the city, leaving a burned out shell of a city that would take many years to bounce back.

At the same time, there is a time for outrage at injustice.

The two photos above are not from the Rodney King beating. They are from the beating and tazing of Anastasio Hernandez-Rojas, which eventually led to his death. This beating was in 2010 and so far nothing has been done to bring these Border Patrol agents to justice. I wrote about Anastasio in a previous post and PBS has recently uncovered new video footage of this savage and unwarranted beating.

Will there be justice for Anastasio?

Will we see and end to this kind of injustice in the next 20 years?